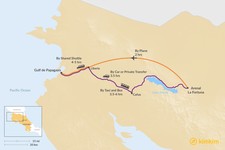 When heading from Arenal/La Fortuna to the Gulf de Papagayo, the 108-mile (173 km) trip will take you almost directly west to the coast. These two locations are connected by some of the most direct routes in the country.

Guanacaste Province has several beaches on the Gulf de Papagayo, and the specific location of them will add or subtract from the length of your journey. This trip will take anywhere from two to four hours, depending on your mode of transportation.

If you’re interested in exploring more of the west coast beaches, consider the 5-day Guanacaste from Liberia itinerary.

There are direct, hour-long flights between La Fortuna and Liberia. This would eliminate part of the drive, but still require the use of a taxi, shuttle, or rental car to and from the airport.

Even though the drive is an easy one, the rainy season and unpredictable weather may lead you to have someone else drive. The roads between Arenal and Liberia can be blocked by mudslides or riddled with potholes in the rainy season and the last leg can be difficult to manage if you aren't comfortable with the rough terrain.

The route the private transport will take will either head west from La Fortuna to Liberia or they may go east from La Fortuna, taking a small detour but avoiding some of the rougher roads and will give you a view of the Tenorio Volcano.

You may be surprised at how simple the drive from Arenal to Gulf de Papagayo is. The whole thing takes just three hours and consists of a few turns. When leaving Arenal, you can get one last glimpse of the volcano and then continue west on Route 142 and then continue onto the InterAmericana Highway, where you’ll enjoy a smooth, paved ride for 27 miles (44 km).

There are a few places you may want to stop along the way, between Arenal and Liberia. Both Tilaran and Cañas are great local towns with excellent food options. From Liberia to the gulf, it’s a straight course on Route 21 and then a right onto Route 253 until you arrive on the peninsula.

There is a shared shuttle option from Arenal to the Gulf de Papagayo which is a great option for a relaxing and reliable trip. The trip will take about 4.5 hours and is a safe and secure method of traveling between the two locations.

By Taxi and Bus

Taking a combination of bus and taxi is another option. This is the least convenient and one of the slowest options of travel to Papagayo. Start by taking a 90-minute taxi ride from La Fortuna or Arenal into Cañas where the buses depart hourly for Liberia. From Liberia, you can take another taxi to Papagayo. There is also a bus that goes from Liberia to Playas del Coco, from which you can take a taxi the rest of the way.

Fun for the whole family, this itinerary covers two of Costa Rica's most...

Ari Z.
Washington, United States
"We booked a trip to Costa Rica through KimKim using Randall. He was amazing, and the process of setting up and managing the trip was great. We made several..." read more
Traveled to Costa Rica as a family in December, 2021
D
Darion L.
California, United States
"Randall provided insider advice on Costa Rica, a country I struggled to piece together things online. He gave a great itinerary for my friends and I based on..." read more
Traveled to Costa Rica as a group in December, 2021

Alda Bernice M.
California, United States
"In Arenal/Fortuna we took a Traditional Cooking Class at the Arenal Vida Campesina, a family-owned organic farm, where we learned to cook "verduras salteadas..." read more
Traveled to Costa Rica as a family in November, 2021

Raka M.
Illinois, United States
"Chris and Randall planned an absolutely fantastic trip for my father and me. We did activities that the both of us enjoyed, and we appreciated still having f..." read more
Traveled to Costa Rica as a couple in December, 2021
B
Beth B.
New York, United States
"What a beautiful country filled with the nicest people on the planet! Diego helped our family plan a memorable trip to Costa Rica. We trekked through the rai..." read more
Traveled to Costa Rica as a family in December, 2021

Wendy S.
"We had a wonderful trip to Costa Rica planned by Olman (through KimKim). From start to finish the whole experience was easy and seamless. Olman was extremel..." read more
Traveled to Costa Rica as a family in December, 2021

Kelly J.
Connecticut, United States
"Our 14 day trip to Costa Rica was the best vacation we have ever had! Diego planned a trip that had a perfect balance of fun, adventure, relaxation, beauty, ..." read more
Traveled to Costa Rica as a family in December, 2021
Create your custom-made trip to Costa Rica
Get Started