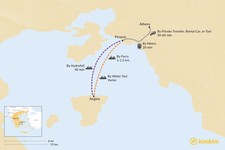 The island of Aegina is a popular day trip or weekend getaway from Athens. The distance between downtown Athens and the port of Aegina is just 30 miles (48 km).

Getting from Athens to Aegina involves two steps. First, you will need to get from central Athens to the port of Piraeus. From there, you can travel to the island by water transport. Besides the options listed below, private helicopter tours of Aegina are also available. Many of these leave directly from Athens airport.

Before you leave Athens, don’t forget to check out the city’s world-famous attractions, like the Parthenon and the Acropolis Museum, with this 5-day highlights tour.

The easiest option is booking a private transfer from Athens directly to Piraeus Port. The ride takes about 30 minutes from central Athens, or an hour from the airport.

If you prefer renting a car, getting from central Athens to Piraeus is a straightforward drive along highways 91 or 56. Avoid traveling at rush hour to beat the traffic. Exercise caution when driving in Greece, as road rules are often ignored. If you would like to bring your rental car with you to Aegina, you will need to take the regular ferry and not the hydrofoil.

Taxis can easily be hailed in central Athens or called from your hotel. The trip to Piraeus port should be short and cost around 10-20 euros. To get the correct price, insist that the driver use the meter.

Getting from Athens to Piraeus port by metro is fast and simple. Take the M1 (green line) from any central metro stop to the “Piraeus” stop at the end of the line. Metro tickets can be purchased at the station. Single tickets on the Athens metro are valid for 90 minutes, and a number of other ticket options exist, including 24-hour, 3-day and 5-day tickets.

Try to avoid rush hour if possible, particularly if you have luggage with you, as the metro can get quite crowded.

The “flying dolphin” hydrofoil is the quickest way to get from Piraeus to Aegina. Tickets are slightly more expensive than the regular ferry, but should still be under 15 euros. They can be purchased online or at the ticket office at Piraeus, but not aboard the hydrofoil.

Hydrofoils run about every hour, but stop running earlier than the regular ferries. Timetables can be found at the ticket offices, or online. Vehicles cannot be taken aboard the hydrofoils.

Ferries to Aegina are operated by Saronic Ferries and Agios Nektarios (ANES). The ferries leave frequently from Piraeus port (about every hour). Vehicles can be brought with you.

The route is scenic and provides attractive views of the Attic Peninsula. If you leave early or late enough on the way to or from Aegina, you may have the chance to enjoy a sunrise or sunset.

Water taxis are privately owned boats that transport passengers around the Greek islands. While some water taxis do operate between Aegina and Piraeus, availability is sporadic. This method of transport is usually recommended as a backup option, in case of an emergency or a ferry strike.

Phone numbers for water taxi companies can be found online. Ticket costs may vary, depending on the number of people in the taxi.