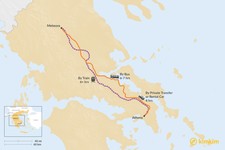 The distance from Athens to the UNESCO World Heritage Site of Meteora is about 222 miles (357 km). The easiest and most comfortable way to get from Athens to Meteora is by rental car or private transfer. There is also the option of traveling by bus or by train, although the routes are indirect and require several changes in towns along the way.

The incredible Meteora complex is home to six cliffside monasteries, perched atop unique rock formations located near the Pindus Mountains. You can explore Meteora, along with other highlights of Greece like Delphi, Olympia, and Mycenae, with this 7-day itinerary leaving from Athens.

Private transfers can be booked to take you from your hotel or from Athens airport directly to Meteora. If you prefer to self-drive, you can book a rental car from any of the many major rental companies with a presence in Athens.

You will have to pay tolls when driving from Athens to Meteora. Tolls in Greece are usually inexpensive, and are paid in cash to a tollbooth attendant.

There are several worthwhile stops on the way from Athens to Meteora. These include the Archaeological Museum of Thebes, or the museum and archaeological park at Delphi (stopping in Delphi will require you to take a slightly longer route).

Duration: around 6 hours for the direct train + bus, more with other routes

One direct train per day leaves in the morning from Athens’ Larissa Station directly to Kalabaka, which is the closest town to Meteora. If you want to leave later, you have the option of switching trains in Paleofarsalos. Trains can be booked in advance.

Larissa Station is located not far from the National Archaeological Museum in Athens. It can be accessed via the “Larissa” stop on the M2 line (red line) of the Athens Metro, or by taxi.

There is a local bus running three times daily from mid-March to November that can take you on the final leg of the journey, from Kalabaka to Meteora. The bus does not run in the winter. If you are traveling during the off-season, you have the option of taking a cab or hiking to get to the monasteries.

KTEL operates buses heading from Athens to the city of Trikala. From Trikala, you can take another bus onward to Kalabaka. Buses from Trikala to Kalabaka run every hour.

The bus from Athens to Trikala leaves from KTEL Bus Station B (Liosion). This station is located in the northern part of Athens, about a ten minute walk from the “Agios Nikolaos” or “Kato Patissia” stops on the M1 line (green line) of the Athens Metro. It can also be accessed via a 20-minute cab ride from downtown Athens, or by catching bus X-93 from Athens Airport.

F
Fernando C.
Nevada, United States
"We are back in the US and already missing Greece. We don't have enough ways to express our thanks to Maria, Harris and the staff at Travel 12 for the help i..." read more
Traveled to Greece as a couple in September, 2021

Patrice V.
Missouri, United States
"Harris was wonderful to work with and designed a trip that exceeded our expectations. Our activities were fun with great friendly guides, our accommodations ..." read more
Traveled to Greece as a group in September, 2021

Mary C.
Missouri, United States
"Working with Harris was an absolute delight. I have to admit I was a little nervous using Kimkim, you hear about all of these internet scams, but I forged ah..." read more
Traveled to Greece as a group in September, 2021
C
Carla W.
Texas, United States
"What an amazing trip and an awesome service kimkim provides! Everything went so smoothly for our 8-night trip to Athens, Naxos, and Santorini. The hotels w..." read more
Traveled to Greece as a couple in August, 2021

Natalya R.
Massachusetts, United States
"Maria was very helpful and knowledgeable when we were planning our trip to Greece. Greece has endless destinations! Maria helped me to pick 3 islands base o..." read more
Traveled to Greece solo in September, 2021
J
Jeff P.
Arizona, United States
"We thought KimKim and Tasos were great!! Tasos planned all aspects of our Greece trip (including a sailboat charter, numerous excursions, car rental and b..." read more
Traveled to Greece as a group in September, 2021

Ashley F.
New Jersey, United States
"We had a great 9 day trip. I normally dont use travel agents but this process far exceeded my expectations. Especially with covid protocols changing so oft..." read more
Traveled to Greece as a group in August, 2021
Plan your trip to Greece
Customize your trip with help from a local travel specialist
Plan Your Trip