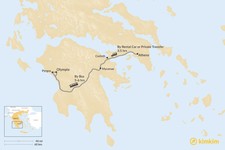 The distance from Athens in the Attic Peninsula to the town of Olympia in the Peloponnese is about 180 miles (290 km). The most comfortable way to get from Athens to Olympia is by private transfer, while the cheapest way is by bus.

Olympia is a very important site in ancient Greek history. History buffs looking to explore more of classical Greece may enjoy this twelve-day itinerary from Athens.

Getting from Athens to Olympia takes about 3.5 hours along highways A8 and E65. The route from Athens to Olympia is very scenic; for part of the way, you will be driving along the Saronic Gulf, and will pass through the famous Isthmus of Corinth. Keep an eye out for nature, too; the Peloponnese is famous for its olive groves and lemon trees.

Many major rental car companies can be found in Athens. In general, you should exercise caution when driving in Greece, as drivers can be aggressive and road rules are often ignored.

A convenient option is hiring a private transfer, either as a day trip or part of a longer tour. Notable sites you can incorporate as stops along the way include the ancient ruins of Corinth and Mycenae.

The main intercity bus company in Greece is called KTEL. KTEL buses run from Athens to the city of Pyrgos, where you can change to a local bus that will take you to Olympia. The ride from Athens to Pyrgos takes about 4-5 hours, and from Pyrgos to Olympia is an additional 30 minutes.

KTEL buses from Athens to Pyrgos run every 1-2 hours. Tickets can be purchased at the station or on the bus. If you plan to buy tickets on the bus, having coins or small notes on hand is advisable.

The bus from Athens to Pyrgos leaves from Kifissos Bus Terminal (KTEL Bus Station A). The station is located on a highway in the north-western part of Athens. The closest metro stop is “Agios Antonios” on the red line (M2) of the Athens metro, and you will have to walk about 15 minutes from the metro stop. Kifissos Bus Terminal can also be accessed via city bus 51 from Omonia Square.

The local bus from Pyrgos to Olympia runs about once every two hours.

Besides its mainland, Greece is also made up of thousands of islands, a...
Getting Around Greece

M
Miguel M.
Florida, United States
"Probably the most wonderful and relaxing vacation we’ve taken in 30 years!!! Our trip to Delphi was both beautiful and educational, and our guide Zaida was..." read more
Traveled to Greece as a couple in September, 2022
R
Rene O.
Utah, United States
"Dear Eleni! Our trip to Greece was a "trip of a lifetime." For Brett and I, this was our first trip to Europe and everything was perfect! We loved the accomm..." read more
Traveled to Greece as a group in September, 2022

Carla A.
Oklahoma, United States
"Every part of this trip was flawless and Harris did a fabulous job planning all the details. We especially enjoyed the town of Nafplio and the private tours ..." read more
Traveled to Greece as a couple in September, 2022

Mark A.
Singapore
"The overall trip 7 days was very well handled by Kim Kim and their affiliates in particular the following : a) Acropolis and Flavors of Athens. - Aleks the..." read more
Traveled to Greece as a couple in September, 2022

Shreya T.
Florida, United States
"We worked with Eleni to plan this memorable and special trip to Greece and I cannot stress how fantastic she was to work with. From day 1, she listened and a..." read more
Traveled to Greece as a couple in September, 2022

Jeff H.
Greece
"Nadia did a fabulous job of planning our vacation for us. Everything was on point and on schedule from the hotels, transfers and excursions." read more
Traveled to Greece as a group in September, 2022
K
Ken K.
Canada
"First of all, the trip exceeded our expectations by a long ways! Thank you so much Chris for all your help in the planning and execution! Our first stop wa..." read more
Traveled to Greece as a couple in September, 2022
Create your custom-made trip to Greece
Get Started