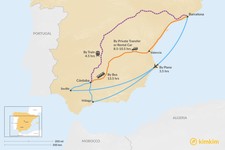 The distance between two of Spain’s greatest cities—Barcelona and Córdoba—is 441 miles (710 km), traveling from the northeast corner of the country to the heart of Andalusia. The easiest way to make the trip is by the direct high-speed train, which takes about 4.5 hours. Driving yourself in a rental car is also a possible option, but takes a lot longer (8.5 hours).

The most luxurious option is to hire a private car service. There are no direct flights to Córdoba, as the airport only supports private planes. But a creative option is to fly to one of the nearby cities of Málaga or Seville (you can make a day trip of it) and take a short train from there.

Buses run from Barcelona to Córdoba a couple times every day, but are not recommended due to much longer travel times and only slight financial difference.

By far the most logical and quickest option, taking the AVE train moves you directly from the Barcelona-Sants, Barcelona’s main train station in the west of the city to Córdoba Central, only 20 minutes walking to Cordoba’s main attraction—the Mezquita, a massive mosque dating from 784 CE and one of the world’s greatest examples of Moorish architecture.

AVE trains, run by Renfe, are comfortable and offer air conditioning, a bar-buffet car, and power outlets. Three tiers of tickets are available including turista (standard), turista plus (comfort), and preferente (premier). Turista plus customers enjoy a spacious reclining seat, while the preferente selection offers food service at your seat and access to business lounges at select stations. The first train leaves Barcelona at around 7 am, the latest at 5 pm.

Trains run every 1-3 hours, though some trips include a transfer in Madrid. Tickets should be booked ahead of time through Renfe’s website, as trains often sell out.

Having a car gives you the freedom to explore the route between Barcelona and Còrdoba, and perhaps take a few side trips along the way. Taking the fastest route on the AP-7 highway brings you down the coast to Valencia. Spain’s third-largest city sits on the Mediterranean coast and is home to the City of Arts and Sciences and a well-preserved historic center. From there you can cut directly west on the A-4 highway, or take the scenic route by staying on the A-7 all the way through Granada, the capital of Moorish Andalusia that is home to the famous Alhambra palace and fortress. The longer route will take about 10.5 hours.

Another option (9.5 hours) takes you west to Madrid on the A-2 highway. The country’s capital is filled with cultural and gastronomic experiences, so be sure to check out our recommendations for a 6 day trip through Spain’s two biggest cities.

Rental car companies abound in Barcelona, with Alamo, Enterprise, and Avis being the highest rated. Remember that non-EU driver’s license holders must obtain an International Driver’s Permit in order to drive in Spain.

Alternately, hire a private transfer. You can request scenic stops along the way, including the port city and ancient Roman colony of Tarragona or the medieval town of Alarcon.

While there are no direct flights from Barcelona to Córdoba, one option is to take a short flight (1 hour and 40 minutes) to Málaga or Seville, and then from either city take a train (1.5 hours) to Còrdoba.

This route is only recommended if you want to stop for a day or two in either of the two cities. Or consider making a longer stop to see both of these Andalusian cities and go on a wine tour in Ronda as proposed in the 4th option in 7 Days in Spain: 4 Unique Itinerary Ideas.

Only one company offers buses from Barcelona to Córdoba—Alsa. Buses run once or twice daily, but take nearly triple the amount of time as the train. The bus costs only slightly less than the train, and both are the most affordable of all the options.