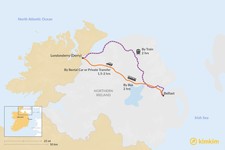 Londonderry (Derry) is just 70 miles from Northern Ireland’s capital, Belfast. You can easily visit both cities on the same trip thanks to the extensive network of highways, trains, and buses. The A6 highway connects the two, so the fastest way to reach Londonderry is by car (rental or private transfer) in about 1.5 hours.

Buses and trains are a great alternative to driving. Northern Ireland’s public transportation network, Translink, is extensive and offers numerous departures throughout the day. Whether you prefer the bus or train, you’ll reach Londonderry in about two hours.

The fastest and most convenient way to reach Londonderry (Derry) from Belfast is by rental car or private transport. The route is straightforward, as it follows the A6 highway the entire time. The lakeside city of Antrim is home to Antrim Castle Gardens, a picturesque stopping point for tea or lunch.

If you have a bit more time, you can opt for a more scenic route which takes about two hours to reach Londonderry. After passing by Antrim, head north on highway A26 and connect with highway A44. From here, you’ll meet the coastline of the North Atlantic Ocean at the town of Ballycastle. On the way, you’ll pass near the famous site, the Dark Hedges—a dramatic row of 18th-century beech trees—along Bregagh Road.

Slightly to the east of Ballycastle, you’ll find stunning views at Torr Head; and to the west, the Carrick-a-Rede rope bridge. This route also takes you by the popular tourist sites the Giant’s Causeway and Dunluce Castle before arriving in Londonderry.

By Train or Bus

Just as with driving, the bus follows the A6 highway. If you want a more scenic route, you can opt for the train. The train heads north towards Coleraine and meets with the coastline at Castlerock. You’ll pass long, scenic beaches to the right and dramatic cliff sides to the left.

How to Get from County Cork to County Kerry

The distance from County Cork to County Kerry is about 72 miles (101...
Getting Around Ireland

Get ready to immerse yourself in Irish culture, history, and landscape...

Looking for a trip to Ireland that mixes culture and history with...

On this tour, you'll experience some of Ireland's most beautiful hikes....

Discover the scenic highlights of Northern Ireland on this well-rounded...

Independent travelers will experience the magic of Northern Ireland on...

On this unique exploration of the northern coastline, you will learn the...

Explore the northernmost point of Ireland on this self-guided cycling...

W
Whitney S.
Nevada, United States
"Everything was perfect. I don't know what resources KimKim has for this, but it would be awesome to have audio to listen to in the car while driving to the n..." read more
Traveled to Ireland as a group in October, 2021

Rebecca H.
United States
"A friend and I had decided to plan a trip to Ireland . I had used kim kim for a trip I planned with my son to Australia. We worked with Dean this time around..." read more
Traveled to Ireland as a group in September, 2021
C
Cameran H.
California, United States
"Our experience with the team at KimKim was very professional. We had a well organized itinerary. The team checked in with us to ensure everything was goi..." read more
Traveled to Ireland as a couple in September, 2021

Veronica O.
United States
"Our guide, Dean M was super brillant. We had the best time. He made sure we had the history of each place we stopped. And he added a few along the way he fou..." read more
Traveled to Ireland as a couple in September, 2019
Create your custom-made trip to Ireland
Get Started