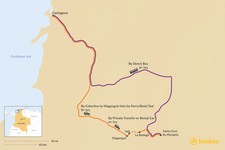 Santa Cruz de Mompóx is 168 miles (271 km) away from Cartagena via roadways. Traveling here used to be more complicated, but thanks to some newly built bridges, there are now more direct options available to access this charming colonial city.

The least complicated way to get here is via a direct bus from Cartagena. The other options include a combination of a bus, a ferry, a small boat, and a taxi which can be time-consuming. You can also take a private transfer or your own rental car, but both would include crossing the Magdalena River on the ferry to a port called La Bodega and then continuing on the road to your final destination.

The main benefit of hiring a private transfer or renting a car is that it would allow you the freedom to explore this area at your own pace. From Cartagena, your destination would be the ferry in Yatí, a town which is just 5 minutes from Magangué. This is where you’d want to cross the river via a ferry to arrive at a port called La Bodega. Ferry schedules can be inconsistent, so it’s best to call the day before and see if it’s even running. From La Bodega, you’d continue on the road to Mompox, which is about 45 minutes away.

The most simple transportation method is to take a direct non-stop bus from Cartagena to Santa Cruz de Mompóx. Unitranco is the name of the bus company and it drives route three times a day, in the morning, afternoon, and at night. It usually takes 6 hours and 30 minutes to reach Santa Cruz de Mompóx.

This method is only recommended for the truly adventurous, as this transportation method is very time-consuming can be somewhat confusing. You would first want to take a Colectivo or minibus to Magangué, which takes about 5 to 6 hours.

Then, at the port you’d take a ferry or what the locals refer to as a "Chalupa" or motorboat taxi along the Magdalena River to La Bodega port, which takes about 15 minutes. From La Bodega, take a taxi to Mompox which takes approximately 45 minutes. Again, this way could be very slow since most transportation methods wait to depart until they are completely full of passengers before they leave.

Nuquí is 121 miles (196 km) away from Medellín, which sounds like a...
Getting Around Colombia

Explore Cartagena’s colonial architecture by foot, partake in its rich...

One of the best aspects of visiting Cartagena on Colombia's northern...

Kerry P.
California, United States
"We had a great time on our family trip to Colombia. KimKim made everything so easy, from the minute we started looking til the time we boarded our flight bac..." read more
Traveled to Colombia as a group in November, 2022

Celeste H.
California, United States
"Our trip to Colombia was incredible!!! Our itinerary included Medellin, Pereira and Cartagena. Right from the get go Margarita was attentive, available to..." read more
Traveled to Colombia as a family in November, 2022

Kelly S.
Michigan, United States
"As a woman traveling alone to a remote part of Colombia I decided to use an agency. I have to tell you KimKim was excellent! Wendy made me feel more than con..." read more
Traveled to Colombia solo in October, 2022

Bert S.
Arizona, United States
"A Great Trip, Wonderful Hotels and tours. Everyone had a wonderful time. The tour guide Javier did a great job showing us around. Would recommend Kimkim serv..." read more
Traveled to Colombia as a family in September, 2022

Adam D.
Texas, United States
"This is a little belated, but the whole itinerary that Nathalie planned was just incredible. All experiences were very authentic and unique. It felt like the..." read more
Traveled to Colombia as a group in December, 2018

Amny G.
New Jersey, United States
"Our trip experience in Colombia was amazing. Michael created literally the perfect itinerary. Alex our tour guide in bogota was so knowledgeable, caring, an..." read more
Traveled to Colombia as a family in September, 2022

Diana L.
Florida, United States
"Things turned out better than expected. Our guides were all fabulous, very knowledgeable and friendly. Laura is very sweet, we met in Bogota and took us to..." read more
Traveled to Colombia as a couple in September, 2022
Create your custom-made trip to Colombia
Get Started