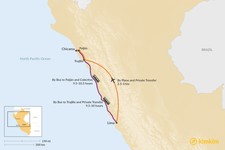 North of Trujillo is one of the best surf resorts in the world: Puerto Chicama. Also known as Puerto Malabrigo (and not to be confused with the unremarkable town of Chicama nearby), is the creation of surfers who traveled the world and discovered what was needed to make a truly memorable surf resort. The facilities are great, but best of all, of course, are the waves: one of the world's longest left-hand breaks, and (so people at the resort claim) the longest that is actually surfable.

Traveling the 395 miles (636 km) from Lima to Puerto Chicama is straightforward in all cases: by a combination of either plane, bus, private transfer, or colectivo taxi.

There are between five and seven daily direct flights between Lima and Trujillo, with a couple of early morning flights and the rest from mid-afternoon to mid-evening. LATAM and Sky Airlines Peru are the main carriers. Flight time is just over an hour. From Trujillo's Capitán FAP Carlos Martínez de Pinillos International Airport, where many taxis wait, it is a 1.25 hour drive by private transfer to Puerto Chicama.

This is the quickest and most expensive means of getting from Lima to Puerto Chicama.

By Bus to Paiján and Colectivo

Buses to Trujillo depart around the clock from Lima for the eight to nine-hour journey. It is not just Trujillo-bound buses stopping in Trujillo; other buses bound for further north (Chiclayo for example) will stop in Trujillo too. In Lima, buses depart for this journey from various terminals, but Cruz del Sur has nine to 12 daily departures from their Javier Prado terminal. In Trujillo, buses generally stop at the Terrapuerto Trujillo.

If Trujillo is the final destination of your bus, change here for another bus continuing north up the Pan-Americana Norte. Ask the driver to let you off at the town of Paiján, around an hour north of Trujillo, at the crossroads with the Puerto Chicama road. If you are on a bus bound further north than Trujillo anyway, ask the driver when you reach Trujillo to let you out in Paiján. From here, jump in a colectivo to Puerto Chicama. The drive takes 30 minutes.

Colectivos are the shared taxis commonly used for transportation throughout Peru, a quicker if pricier alternative to the bus. They leave when full (with four passengers). If you want to leave sooner, you will have to pay for the additional seats.

By Bus to Trujillo and Private Transfer

For this option, travel by bus is as in the previous option. Get out at the bus terminal in Trujillo (the Terrapuerto Trujillo). From here, taxis can be hired for the 1.5-hour drive to Puerto Chicama.

Jeff S.
Louisiana, United States
"This was a 5 plus star experience and completely exceded my expectations. Steve worked with me with my times and desires. For example, I had no desire to sp..." read more
Traveled to Peru as a couple in March, 2020
Create your custom-made trip to Peru
Get Started