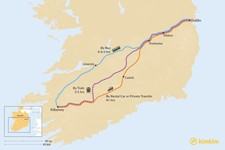 The Ring of Kerry, a scenic drive around Ireland’s Iveragh Peninsula, is 191 miles (308 km) southwest of Dublin. The most convenient way to make the journey is by car, either rental or private transfer. The closest city—and a great starting point for your road trip—is the small city of Killarney, which sits on the edge of Killarney National Park. The drive follows major roadways across the country and takes about 3.5 hours.

Another option is the train, which departs from Dublin’s Heuston Station and arrives in Killarney in about 3.5 hours. Killarney is a good hub, as buses leave regularly to all the major towns along the peninsula, including Kenmare, Sneem, and Killorglin.

You can also take the bus all the way from Dublin via Bus Éireann, Ireland’s regional bus service. After just one connection, you'll arrive in Killarney in about six hours.

The Ring of Kerry is well-known for its walking paths. If you have time to extend your trip, you might be interested in this 8-day walking tour.

The most convenient way to reach the Ring of Kerry from Dublin is by rental car or private transfer. The route mostly sticks to major highways, so even if you’re not used to driving on Irish roads you’ll find the journey fairly straightforward. And if you opt for your own vehicle, you can continue your drive around the Ring of Kerry on your own time.

As you leave Dublin via highways M50 and N7, you’ll head southwest toward the towns of Kildare and Portlaoise. Kildare—known for its world-famous horse races—is a great spot to grab a coffee.

Eventually, you’ll veer left onto highway M8 and pass through Cashel, a small town worth a lunch break. Some other interesting sites along the way include The Rock of Dunamase—the historical ruins of Dunamase Castle with scenic views of the Slieve Bloom Mountains—and The Rock of Cashel—cathedral ruins from the 12th century. Both are set just off the highway.

After Cashel, you’ll merge right onto highways N73/N72. This part of the drive remains flat; but as you near Killarney, you’ll start to see the peaks of MacGillycuddy's Reeks, Ireland's tallest mountain range.

The train is the fastest option, but requires a 10-minute connection in the town of Mallow. Trains leave regularly from Dublin’s western Heuston station and arrive in Killarney in about 3.5 hours. The route runs southwest through Ireland’s picturesque countryside, full of rolling green hills and small towns in the distance. Once in Killarney, you can either rent a car or grab a bus to fully enjoy the Ring of Kerry.

The longest option is the regional bus, which is operated by Bus Éireann. The route requires numerous stops and one connection in either Cork or Limerick. Connection times can be long—at least 45 minutes—but the bus stations are central in both cities, so you can easily grab some lunch as you wait for your next departure. You can either depart in Killarney, or continue to one of the peninsula's many picturesque villages along the Ring of Kerry.

How to Get from County Cork to County Kerry

The distance from County Cork to County Kerry is about 72 miles (101...

How to Get to the Aran Islands

The Aran Islands sit at the mouth of Galway Bay on Ireland’s scenic west...

Galway, Ireland’s popular western hub, is 202 miles (325 km) from...
Getting Around Ireland

Take a 10-day tour through some of the highlights of Ireland with...

B
Betsy L.
Maine, United States
"Our guide Maurice from Ireland Walk Bike Hike was very helpful both before and during our recent trip to Ireland. He and a woman from their office (whose nam..." read more
Traveled to Ireland as a couple in September, 2019
L
Leisa S.
Australia
"I had a really great trip with Kimkim. Everything was so easy all the way through and the team was always a phone call away if I had any questions or needed ..." read more
Traveled to Ireland solo in September, 2019