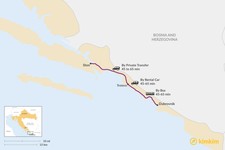 The walled city of Ston and its saltworks located on the Pelješac peninsula in southern Croatia are popular attractions for travelers. There are only 34 miles separating Ston from Dubrovnik, making this an easy day trip.

The drive from Dubrovnik to Ston takes just under an hour, so traveling there via rental car or private transfer is the fastest and most convenient transportation option. You can also make the trip by bus: there are many direct bus connections between the two destinations with frequent departures, especially during the summer season.

This 14-day tour of Croatia begins in the UNESCO-listed city of Dubrovnik and takes in highlights of the Dalmatian coast like the Pelješac penisula, island of Korčula, coastal cities of Split and Trogir, before moving on to the national parks of Krka and Plitvice Lakes and concluding in the capital Zagreb.

If you prefer to have someone else do the driving, a private transfer is a convenient and quick way to travel the short distance from Dubrovnik to Ston. Make a stop in Trsteno on the way to check out the gardens of the Trsteno Arboratum, one of the Game of Thrones filming locations. For details of transfer companies offering private transportation services, get in touch with your local travel specialist.

If you would prefer to make the drive yourself, consider renting a car. It's an easy and scenic drive from Dubrovnik to Ston along the D8 coastal road that winds along the Adriatic coastline. Consider stopping in Trsteno and having a look around the 15th century gardens of the Trsteno Arboratum, one of the filming locations in the Game of Thrones series.

Traveling by bus from Dubrovnik to Ston is also a convenient travel option, especially if you want to avoid the potential hassle of driving and looking for parking. There are several bus companies servicing this route and regular departures from Dubrovnik's main bus station throughout the day. Note that buses many be infrequent outside the summer tourist season. This is a popular route, so do book your tickets online in advance if you're traveling during peak times. Buses in Croatia are generally punctual and comfortable, and Arriva buses offer the perk of free wifi onboard.

Mljet is a popular island with visitors to Croatia and easy to get to...

Discover the ancient cities and natural wonders of Croatia's stunning...