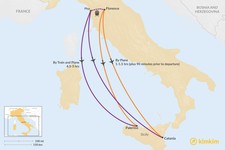 With 395 miles (636 km) between Florence and Sicily, the most efficient way of traveling is via a direct flight to either Catania, an ancient port city, or Palermo, the capital of Sicily. Both destinations are main cities on the Mediterranean island, where you can easily explore other parts of the region—from the hilltop town of Taormina to the historic town of Syracuse.

If you'd like to see some of Tuscany beforehand, you can take a high-speed train to either Pisa or Bologna and fly to Sicily from there. If tours are more your style, follow this 14-day itinerary through Tuscany that starts in Florence and ends in Lucca. Or when you arrive in Sicily, take this 14-day road-trip around Sicily that begins and ends in Palermo. If you have a month to spare, why not do both?

From Florence, you have a choice of two destinations in Sicily that you can fly into: Catania and Palermo. Regardless of whichever you pick, each direct route going out of Aeroporto di Firenze has a duration time of under two hours. Keep in mind that you have to arrive at the airport 90 minutes before departure.

If you choose Palermo, take a direct route to Falcone Borsellino Airport (PMO) that gets you there in as little as 1 hour and 15 minutes. These nonstop flights don't depart from Florence every day, so plan your trip around the schedule or select from multiple routes that have a connecting flight, which can tack on multiple hours. Once at the airport, get to the heart of Palermo via regional train operated by Trenitalia, the government-run railway. The train runs twice an hour and should get you there between 32 and 47 minutes.

For Catania, select a direct flight that will get you to Catania Fontanarossa Airport (CTA) in 1 hour and 30 minutes. Similarly to Palermo, flights headed to Catania do not depart every day, so be sure to check the flight schedules and plan accordingly. Upon arrival, head to the airport bus that gets you into Catania's city center within 6 minutes.

By Train and Plane

Instead of flying directly from Florence to Sicily, you can take a train to Pisa or Bologna and fly to either Catania or Palermo from there, which allows you to experience Tuscany more than you would otherwise. You can get to both cities from Firenze Santa Maria Novella station (Firenze S.M.N. on maps).

For Bologna, both Trenitalia and Italo (a privately owned company) have high-speed trains that will get you to Bologna Centrale station in 35 minutes. Walk across the street from the station to Piazza delle Medaglie D'Oro and take the 7-minute bus to Bologna Guglielmo Marconi Airport (BLQ). From there, take a direct flight to either Falcone Borsellino Airport (1 hour and 15 minutes) or Catania Fontanarossa Airport (1 hour and 35 minutes).

For Pisa, take the high-speed train operated by Trenitalia from Firenze Santa Maria Novella to Pisa Centrale that gets you there in an hour. After exploring the city, take the airport tram to Galileo Galilei Airport (PSA) where you can take a direct flight to Palermo or Catania, both of which take 1 hour and 30 minutes.

Another option is taking the high-speed train from Firenze Santa Maria Novella to Palermo Centrale station, switching trains in Roma Termini. However, keep in mind that this journey is an all-day trip and takes about 15 hours.

Rome and Sicily are approximately 260 miles (420 km) apart as the crow...
Getting Around Italy

Marty S.
Canada
"My lifelong BFF and I decided to spontaneously get away in late August, with trip dates for Sept 2021. I work long hours and don't have the time nor desire t..." read more
Traveled to Italy as a couple in September, 2021
L
Liz M.
New York, United States
"Andrea was great through the entire planning process to the completion of the trip. I will def use him again for my next trip to Italy. The guides and driv..." read more
Traveled to Italy as a group in September, 2021
P
Phoebe P.
Idaho, United States
"The best part of our 14 day vacation was the choice of hotels. Our first two nights at Posta Di Veccia were a perfect way to start the trip. We relaxed the f..." read more
Traveled to Italy as a couple in July, 2021
Plan your trip to Italy
Customize your trip with help from a local travel specialist
Plan Your Trip