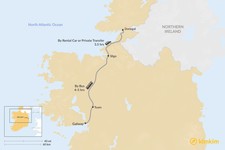 The scenic county of Donegal sits in Ireland’s rural, northwest region. Many who visit the Irish-speaking area use Letterkenny as a hub, which is 155 miles (249 km) from the city of Galway. It’s a small city located along the Swilly River and the scenic coastal drive, the Wild Atlantic Way. The most convenient way to make the journey between Galway and Letterkenny is by car, either rental or private transfer.The drive mainly follows national roads and takes about 3.5 hours.

If you prefer public transportation, the bus is a great alternative. Although it’s a slightly slower option, both regional and private services offer several direct departures each day. Private companies run a bit faster, arriving in Letterkenny in four hours. The regional service takes about five hours, sometimes requiring a connection in Sligo.

The most convenient way to travel between Galway and Donegal is by car. The area is quite scenic, so having a rental car will allow you to explore at your own pace. There are many sites to see, including Glenveagh National Park, Slieve League Cliffs, and Carrickfinn Beach, to name a few. If you’re not interested in navigating the Irish roads yourself, private transfers and tour companies are also available.

The route is fairly straightforward, leaving Galway via route N83 and connecting to N17 at the city of Tuam. Eventually, you’ll switch to N4 and keep north towards Sligo, which is an excellent stopping point to grab lunch. Once past Sligo, N15/13 will take you the rest of the way to Letterkenny.

If you’re interested in an even more scenic route, consider following one or more stages of the Wild Atlantic Way. Both Galway and Letterkenny are on the official route, so you could theoretically enjoy the scenic coastline for the entire trip. This would increase the route to over 10 hours of driving. Another idea is to catch the Wild Atlantic Way after Donegal Town, doubling your driving time to just about six hours. This adds Glen Bay, Doe Castle, and Fanad Head to your list of sites to see.

Both private and regional buses run daily between Galway and Letterkenny. Bus Éireann—Ireland’s regional bus service—offers direct routes, as well as those requiring one connection in Sligo. Both options take about five hours to reach Letterkenny.

The private company, Bus Feda, is a bit quicker. Two direct routes run daily between the two cities in about four hours.

How to Get from Dublin to Killarney

The distance from Dublin to County Clare is about 147 miles (237 km)....
Getting Around Ireland

Get ready to immerse yourself in Irish culture, history, and landscapes...

Traverse the spectrum of the Irish landscape with this 8-day walking...

L
Lorraine B.
California, United States
"I can't speak highly enough about the itinerary that the Ireland Walk Hike Bike team created for us. Dean created a custom 13-day self-drive tour for me and ..." read more
Traveled to Ireland as a couple in June, 2022

Amber S.
Ohio, United States
"Our accommodations were great and our Guide, Denis Beakey, was AMAZING!!! Extremely knowledgeable and pleasant. He was a five star guide for a five star expe..." read more
Traveled to Ireland as a group in June, 2022

Russell G.
Louisiana, United States
"Austin Rock did an excellent job in arranging our ten day visit to Ireland. He took into account our desires to stay in quaint BNBs in small towns, have avai..." read more
Traveled to Ireland as a couple in June, 2022

Peter B.
Massachusetts, United States
"We had never been to Ireland - and needed more than someone to book hotels. We needed advice on where to go, what to see, car rental, etc... and most impor..." read more
Traveled to Ireland as a couple in May, 2022