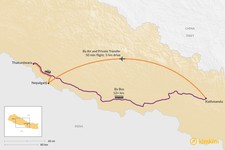 Western Nepal's Bardia National Park is much less frequented than the Chitwan National Park because it's much further from the capital, at 233 miles (376 km). But, travelers who do go find it a worthwhile destination. Here's how to get to Bardia from Kathmandu.

By Air and Private Transfer

Flying to the city of Nepalganj, on the Nepal-India border, and then getting a private transfer the rest of the way is by far the easiest way of reaching Bardia from Kathmandu. Flights leave several times a day from the domestic terminal of Tribhuvan Airport, and take less than an hour to reach Nepalganj. There are a few early morning flights, so try to get on one of these so you have time for your onward journey to Bardia. Also ask for a seat on the right-hand side of the plane, because on a clear day you'll be treated to a great view.

There's not much worth hanging around for in Nepalganj, so it's best to arrange a pick-up to take you straight to Bardia. Because Bardia is quite out-of-the-way, most accommodation in Bardia will be able to arrange pick-ups for you, as can your local provider. The town of Thakurdwara is the headquarters of Bardia, and where you'll find accommodation. It's about a three-hour journey from Nepalganj to Thakurdwara.

Going the whole way by bus is only recommendable if you're on a really tight budget, as it's a long and tiring journey. Many buses travel from Kathmandu to Nepalganj every day, and take around 12 hours. Note that this is not the more comfortable tourist bus service (of the sort that you can get between Kathmandu and Pokhara or Chitwan), but a local bus. These tend to be somewhat uncomfortable, as they're very unlikely to be air-conditioned, may play very loud music, and will probably be over-crowded.

The long journey could be longer than scheduled if you get stuck in traffic leaving the Kathmandu Valley or along the Prithvi Highway (which are both highly likely). The first part of the journey will travel along the Prithvi Highway that connects Kathmandu and Pokhara. The hill, farmland, and river scenery is very attractive. At Mugling you'll turn south to the Terai (the plains bordering India) and continue west through Narayangadh, Butwal, and other towns on the Terai. Although the terrain isn't mountainous, the highways aren't in great condition and the Terai is quite densely populated so you'll be traveling through many towns and urban areas.

At Nepalganj, you'll need to make the onward journey to Bardia (Thakurdwara). Local buses between Nepalganj and Thakurdwara leave a few times a day. If you arrive in Nepalganj late at night you'll probably need to spend the night, and there's not much of interest to tourists here. Alternatively, you can pre-arrange a transfer through your Bardia accommodation, as travelers who fly to Nepalganj tend to do.

Upper Mustang is a restricted area that remains quite a challenge to get...
Getting Around Nepal