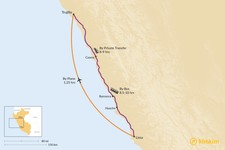 When traveling the 558 miles (898 km) between Lima and Trujillo, the easiest option is to fly. To see more of the land you are passing through, including some of the country's most fascinating archaeology, a private transfer is another possibility. Bus travel is also available, a straightforward and cost-effective option.

There is an energy and a beauty about Trujillo that makes it attractive to linger in, despite the main reason for travelers stopping here being the nearby colossal archaeological sites dating from the Chimú and Moche cultures. See here for some of the highlights of a visit to Northern Peru.

Trujillo is one of the best-connected cities by air in Peru. LATAM are the main operators between Lima and Trujillo, with 4-5 daily flights, whilst Sky Airline Peru also operate 1-2 flights daily. Flights are about every two hours except between 9 am and 2 pm when there are no flights.

This is the most efficient means of travel between the two cities. It is expensive compared to taking the bus, but of comparable cost to organising a private transfer for the same trip.

Aeropuerto Internacional Capitán FAP Carlos Martínez de Pinillos is the official name of Trujillo's airport, which is 6.25 miles (10km) northwest of Trujillo and actually located in Huanchaco. It is 30 minutes' drive from here to central Trujillo.

The Hwy Pan-Americana Norte runs straight up the coast directly to Trujillo. This is one of the better sections of road in Peru and hiring a driver and car makes for a hassle-free trip.

Going this way, it is best to arrange a private transfer for at least a couple of days, thereby allowing for stops off en route: points of interest include the beaches near Huacho, Barranca and the archaeological site of Sechín near Casma. Therein lies the big advantage of a private transfer for this journey: seeing this quite extensive slice of Peru that most international visitors pass over without a second glance.

If time and money allow, extend the hire time for the vehicle and take in some of the inland sites up here such as Kuélap.

This is likely, all things considered, to work out as expensive a means of getting between Lima and Trujillo as flying because of the money you will spend at stops along the way.

This is the cheapest means of travel, and a popular one. It is a smooth and straightforward trip north up the Hwy Pan-Americana Norte along the coast to Trujillo from Lima. Several quite luxurious bus companies make the journey that bit more pleasant.

Remember that in Lima there is no one central bus terminal: different operators each depart from their own terminal in different parts of town.

For this trip, operators to watch out for that command a higher level of comfort include Cruz del Sur. From their Javier Prado terminal, they have 13-14 daily departures except on Sundays when there are eight departures. However, at least half of these services depart in late evening and arrive in Trujillo very early in the morning. Still, comfortable reclining seats and complimentary meals (on some services) make this operator a good bet, although some other operators have similar standards. Be aware that the end destination of the bus is sometimes further north than Trujillo. In Trujillo, buses stop very close to the center: one major advantage this means of transport has over flying.

Jeff S.
Louisiana, United States
"This was a 5 plus star experience and completely exceded my expectations. Steve worked with me with my times and desires. For example, I had no desire to sp..." read more
Traveled to Peru as a couple in March, 2020
Plan your trip to Peru
Customize your trip with help from a local travel specialist
Plan Your Trip