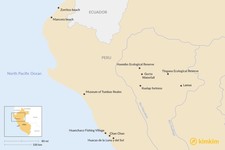 Off-the-radar for most tourists, Northern Peru has its own set of amazing highlights. You can experience Peru's cultural diversity and numerous archaeological sites, given many pre-Inca civilizations settled in the northern regions. Besides culture, you can also enjoy the amazing wildlife, the beautiful flora and fauna, enjoy a hike in the Andes or relax along long stretches of white sandy beach.

Chan Chan is the biggest city ever built in adobe bricks. At the Chimu time, its area was about 24 square kilometers. Today, it has reduced to 14 square kilometers. Chan Chan was the Chimu's political and administrative capital and therefore it is an impressive complex. Near Trujillo, Chan Chan has been a UNESCO's Cultural Heritage of Humanity since 1986.

Kuelap: Citadel of the Cloud Warriors

In Amazonas, in the Andean mountains of Northern Peru, there is the "Machu Picchu of the North". At an altitude of 3,000m, the Chachapoya citadel was built between 500 and 800, before the time of Machu Picchu. At its peak, Kuelap had up to 3,000 inhabitants. Today, we still don’t really know how the Chachapoya could transport the water up hill for all these people. The Cloud Warriors — the nickname of Chachapoya people — had protected their religious and administrative place with up to 20m high walls but it did not prevent a massacre.

In Amazonas, near the Pomacochas Lagoon, you'll find Huembo, an ecological reserve. Amazonas' ecosystem is unique — it's the only place where you have the opportunity to see the Spatuletail Hummingbird. It is one of the most spectacular ones and seeing its mating dance is an unforgettable moment.

Close to Trujillo, you'll find the Sun and Moon Temples. Its construction was done by the Moche during several centuries. Indeed, there are five structures, each one built on top of the other with an important ceremony.

At the West, there is the Sun Temple, which had a political and administrative role. At the other end, at the East, you'll see the Moon Temple, the most important political and religious headquarters of the Moche. Today, visitors are still impressed by the sheer size of these temples.

The Museum of Tumbas Reales is one of the best museums in Peru. Since 2002, it has exhibited the excavations of the site of Sipan. The Lord of Sipan was the Moche Supreme Lord in the 300’s and his grave was found in a truncated pyramid, that was usual for Moche at that time. Its numerous gold, silver and copper pieces are the reasons of its fame.

The waterfalls of Gocta and their 771m are among the highest waterfalls in the world. To discover them, you have to hike through fields and cloud forests. Therefore, you can enjoy the amazing wildlife of Amazonas such as colorful butterflies, the Spatuletail Hummingbird or the Peruvian bird, the Gallito de las Rocas. During the rainy season, you could see up to 22 waterfalls on the way.

In Moyobamba, you’ll discover a different world when you enter the eco-tourism reserve of Tingana. The only access is by boat and the tour is magical. There is no noise, except the wildlife’s one: the wind, the flying insects, and your guide’s whisper as he shows you birds and monkeys. To see and to protect!

Near Trujillo, visit the Huanchaco fishing village. You can walk on its quiet beach and even see the fishermen coming back with the day's catch. In the afternoon, locals and Peruvian tourists come to relax on the beach and suntan. Keep in mind that the water is quite cold if you're considering a swim! You will fall under the spell of its relaxed ambiance and its food: Peruvian Ceviche and fresh fish.

Lamas is about 15km from the city of Tarapoto. There, you can meet the indigenous Quechua-Lamista and discover their history. Take a look at their handicraft shops or go to the association Warmi Wasi to learn the different techniques of producing bracelets out of grains, pottery or weaving. Once in Lamas, don't leave without visiting the medieval castle!

And as we never forget chocolate lovers, stop at the entrance of Lamas and visit the Fundo Ecoperlacha to learn more about cacao production and taste some as well! (Reservation only)

Last but not least, consider some of northern Peru's great beaches. You have to go as far north as you can otherwise the water is too cold. Kilometers of sands are waiting for you around Mancora, Zorritos or Punta del Sal. You’ll find a summer ambiance in little sea villages. Swimming, surfing, relaxing: the perfect place to have some rest after archaeological visits!

Off-the-radar for most tourists, Northern Peru has its own set of...

Discover Northern Peru: A Journey For The Senses - 14 Days

This 14-day trip will take you to the best cities and historic places of...

This 9-day tour through northern Peru will not only show you the...

Get off the beaten path and explore rural communities on this 16-day...
Best of Northern Peru

All aboard! Trains are a practical solution for traveling in Peru: they...
Peru Travel Advice

Shaney G.
Texas, United States
"Our trip planner, Jesus through Peruvian Soul, was amazing! We had to change the itinerary several times in order to accommodate the things we wanted to see..." read more
Traveled to Peru as a family in July, 2022

Joni G.
Texas, United States
" We had a fabulous trip! It was so nice to have everything planned and run so smoothly. Having all the ground transportation planned in advance was really ni..." read more
Traveled to Peru as a family in July, 2022
Create your custom-made trip to Peru
Get Started