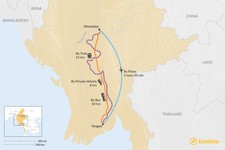 Getting to the former capital of Yangon from Mandalay is a fairly easy journey and one that's highly recommended given that the cities are two of the best destinations in Myanmar. Yangon, which sits about 390 miles (628 km) south of Mandalay, can be reached via the Yangon-Mandalay Expressway in about 8 hours.

It's a scenic drive with several opportunities to stop along the way at places like Meiktila, an ancient Indian kingdom, or the town of Taungoo in the Bago Region. You can also split the trip up into two days, stopping in the modern capital of Naypyitaw for the night. If you don't want to drive, there are also options via bus, train, and plane.

If you don't feel like arranging your own transport, another great option is to book a tour. There are tons of wonderful trips of varying lengths that include both cities such as this 10-day tour (with a sunset cruise on the Irrawaddy River) or this 8-day trip (with a stop in Amarapura to visit silk-weavers and monks).

Going by plane is the quickest, not to mention the most comfortable, way to get to Yangon from Mandalay. The flight is about an hour and 20 minutes (although calculating security lines and drive time brings it to about 4 to 4. 5 hours total). Yet even with all of that, it's half the time of the next fastest option.

If you prefer to either drive yourself or hire a chauffeur, there are lots of options for traveling from Mandalay to Yangon by private vehicle. Hiring a driver will offer you the choice of regular car or minivan. You can also rent a vehicle, driving on the Yangon-Mandalay Expressway south for about 8 hours.

The route is scenic and there are a number of towns to stop at along the way to stretch your legs including Meiktila and Taungoo. Another option is to take it extra leisurely and do the trip in two days, staying in Naypyitaw for the night. This is the current capital of Myanmar and includes attractions like the Uppatasanti Pagoda or National Museum.

Traveling by bus takes a bit longer than journeying by private vehicle. However, it's much cheaper and generally speaking the buses are well-maintained and comfortable. All of the VIP buses have air conditioning and many have extra such as charging ports for your phone or tablet. They also usually serve snacks and water, and allow you to take breaks along the way.

A handful of services operate this route including JJ Express, Tet Lann, Man Shwe Pyi, Mandalar Minn, Khaing Mandalay, and others. Some will pick you up at your hotel while others meet you at a central bus station.

The last option is traveling by train which is available, but not recommended. There are several departures each day which leave in the early afternoon or evening and arrive in the morning. They depart from Mandalay Central Station and drop you off at Yangon Central Station. Trains in Myanmar are notorious for being exceptionally slow, bumpy, and uncomfortable. Still, if you're on a serious budget, they are usually the cheapest option.