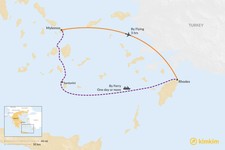 The distance between Mykonos in the Cyclades and Rhodes in the Dodecanese Islands is 172 miles (277 km). Unless you have private water transport, there is no direct way to get between the two. Your options are to either take a flight that connects through Athens, or get a ferry to another island and then travel onward to Rhodes.

If you’d like to do some more island-hopping once you reach Rhodes, you can explore a few of the Dodecanese islands from there with this four-day itinerary.

It’s difficult to find connecting flights from Mykonos to Rhodes. However, if you’re lucky, you may find a flight that works for your travel dates.

Several airlines operate flights on this route, with layovers in Athens. The flight from Mykonos to Athens takes 40 minutes, and from Athens to Rhodes takes one hour.

Duration: one day or more

You can also get from Mykonos to Rhodes by traveling to an island between them, and then catching another ferry to your final destination. One good option for a stopover is the popular, scenic island of Santorini (Thira).

Several ferries leave daily from Mykonos to Santorini. Booking in advance is recommended, especially during the high season (summer), as this route is very popular. Most ferries to Santorini take about four hours, although there’s a high-speed ferry that takes two hours.

If you plan to rent a car on Mykonos, you’ll be able to take it on certain ferries for an additional fee. However, some rental companies won’t allow you to transport cars between islands, so be sure to check with your company beforehand.

Mykonos has two ports: a New Port and an Old Port. They are located about 2 miles (3 km) apart. Until recently, the New Port served large car-carrying ferries, while small passenger ferries arrived at the Old Port. However, as of 2019, all ferry traffic will use the New Port only. It’s a good idea to arrive at the port early when waiting for your ferry, as it can get very crowded.

The New Port is located about a 15-minute drive from Mykonos’ town center. You can get there using a private transfer, a water taxi (Mykonos SeaBus), or a public bus. Note that taxis can be difficult to find on Mykonos.

Once you’ve arrived on Santorini, there is plenty that you could stop and see, especially the iconic blue-and-white buildings in the town of Oia. If you have time to spare in your itinerary, it may be worth spending a day or two on the island.

When you’re ready to make your way to Rhodes, you can catch another ferry from the port in Santorini’s main town. Ferries to Rhodes leave only a few times per week, so it’s worth booking in advance. High-speed ferries can take as little as eight hours, while the regular ferry takes 21 hours. Many ferries leave very early in the morning, or late at night.

Head to Greece for 14 days of relaxation. Start with a culinary tour and...

Dive headfirst into history with this tour of some of ancient Greece's...

Leticia C.
New Jersey, United States
"Dimitris was such an excellent specialist to work with. He was quick to respond, and was able to accommodate all of my requests even with short notice. Altho..." read more
Traveled to Greece as a couple in August, 2021

Jason C.
California, United States
"Our trip to Greece couldn't have gone better. Beginning with the itinerary creation process, Christos was responsive, and flexible in adjusting the itinerary..." read more
Traveled to Greece as a family in August, 2021

Brad R.
Massachusetts, United States
"Marcus the taxi driver in santorini was HILARIOUS He taught us a lot about the country. To briki. Pirousi were the best restaurants in fira We felt the..." read more
Traveled to Greece as a couple in August, 2021
Plan your trip to Greece
Customize your trip with help from a local travel specialist
Plan Your Trip