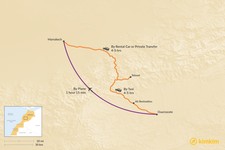 Travelers making their way between the city of Ouarzazate at the base of the Atlas Mountains to Marrakech have several ways to get there. Choosing between a plane, a rental car, and a taxi will be determined by the time you have to spare, your interest in seeing the many points of interest along the way, and your appetite for navigating occasionally vertiginous curves of mountain road, whether on your own or with a driver.

The fastest way to get from Ouarzazate to Marrakech is by plane. The flight is only a little over an hour long, making flight an appealing option for those with tight schedules and little interest in seeing the countryside between the two cities.

However, travelers should note that there is typically only one flight per day from Ouarzazate to Marrakech, and scheduling of other activities in both cities on your date of travel will need to be arranged around this limited flight schedule.

Travelers interested in seeing the many small towns and archeological sights along the way from Ouarzazate to Marrakech may wish to hire a driver.

The many points of interest include Ait Benhaddou, a town with a UNESCO World Heritage Site designation for its ksar: a group of earthen buildings surrounded by stone walls, representing a traditional pre-Saharan habitat. Another unique stop along the way might include the kasbah of Telouet, a Berber village where many drivers who take this route stop for a traditional meal.

How to Get from Merzouga to Ouarzazate

When traveling from the Saharan town of Merzouga to the city of...

The Moroccan city of Chefchaouen, in the Rif Mountains, is famous for...
Getting Around Morocco

Thomas H.
Texas, United States
"Where do I begin? Every aspect of this experience was just fantastic! This was a Dad/Daughter adventure and we couldn't have been more pleased with this adve..." read more
Traveled to Morocco as a family in February, 2020
Create your custom-made trip to Morocco
Get Started