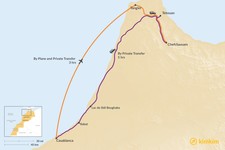 Travelers looking to make the 210-mile (338 km) trip from the coastal city of Casablanca to the famous "Blue City" of Chefchaouen have several options, but by far the easiest and most convenient will be taking a private transfer. The drive should take just about five hours, and the journey will afford you the opportunity to see several points of interest along the way. It's also possible to fly to Tangier and make the additional two-hour drive via taxi from there.

The coastal drive from Casablanca to Chefchaouen passes through many significant cities and natural sites where you may wish to stop to explore.

North along the Atlantic coast is Morocco's capital, Rabat. Rabat is considered a UNESCO World Heritage Site, and those driving through around lunchtime, in particular, may wish to make a stop. Hungry travelers will want to head to the medina and visit its food stalls, which tend to be slightly less crowded with tourists than those in Morocco's other major markets. Visitors won't want to miss a chance to roam around Rabat's Kasbah des Oudaias—an ancient citadel that dates back to the 1100s—and catch a view of the beach from its viewing platform.

Further along is the freshwater lake Lac de Sidi Boughaba, where you can see thousands of birds on their migratory journey from Europe to sub-Saharan Africa. Stopping in the preserve will give you a chance to see over 200 species of birds, including flamingos and marsh owls, along with rare and endangered species, like the marbled duck.

Further along the drive, you may wish to stop in the fascinating and under-the-radar city of Tetouan, the center of the Spanish protectorate from 1912-1956. The city has long been culturally connected to the region of Spain known as Andalusia, and this influence can be seen in its art and architecture. To check off another UNESCO site, head to Tetouan's walled medina.

Those looking to shorten the journey may opt to fly from Casablanca (CMN) to Tangier (TNG), and then travel onwards from Tangier by private taxi. The flight takes about one hour, and the drive from the airport in Tangier to Chefchaouen will take an additional two hours.

How to Get from Marrakech to the High Atlas Mountains

Marrakech is just 55 miles (90 km) from Imlil, a small town and popular...
Getting Around Morocco

This highlights tour checks off Morocco's top cultural and natural...

Arran R.
Portugal
"We had an incredible time in Morocco! The tour was well put together, informative and fun! We felt like we got a good taste of many parts of the country...." read more
Traveled to Morocco as a couple in November, 2022

Maribel G.
California, United States
"Thank you thank you THANK YOU, Megan!! Beautiful Moroccan adventure. Everything was even better than expected. Hassan made our long-hours trips very enjoya..." read more
Traveled to Morocco as a couple in October, 2022

Pam C.
South Africa
" We absolutely loved our trip to Morocco, it was an incredible experience. Our thanks go to our local specialist, Megan and her Kimkim + Wonderlust team wh..." read more
Traveled to Morocco as a couple in October, 2022

Connie P.
Canada
"Most importantly we felt SAFE at all times. However after being to Morocco I feel it is an extremely safe country. Thanks to our driver Rafiq for being just ..." read more
Traveled to Morocco as a couple in November, 2022
Create your custom-made trip to Morocco
Get Started