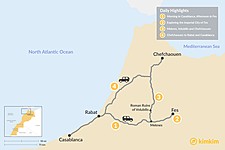 This 4-day itinerary focuses on several areas in northern Morocco, from medieval medinas to modern cities. Start in Casablanca and explore imperial Meknes, the cultural capital of Fes, Roman ruins at Volubilis, and the blue streets of Chefchaouen.

Welcome to Morocco! Welcome to the modern coastal city of Casablanca. Casablanca's main attraction is the relatively modern and monumental Hassan II Mosque. Inaugurated in 1993, it sits on an outcrop jutting into the Atlantic and offers breathtaking views. It has a 690 feet (210 m) minaret—the tallest structure in Morocco and the tallest minaret in the world. What makes this mosque additionally unique is that it is one of the few mosques in the country non-Muslims are permitted to enter. Join a guided tour and appreciate the fine examples of Moroccan and Islamic artisanship.

From there, carry on eastward to the sprawling imperial city of Fes (Meknes, Rabat, and Marrakech are the others)r. Before venturing into its UNESCO protected medina (old quarter), climb the small hill to the Merenid Tombs to enjoy an encompassing view of the city as well as to orient yourself. It's best to visit the tombs during dusk as the city lights start to come on and the muezzin's calls to worship sound through the valley. Return to the medina and to your accommodation, a traditional riad.

Fes is the oldest of the four imperial cities and is considered to have the most complete medina in the Arab world. Relatively untouched since it was founded over 1000 years ago, Fes' haphazard streets provide you with a sense of what it was like to live during medieval times in Morocco. Often considered the country's cultural capital, it is made up of three parts, two medina quarters, Fes el Bali and Fes el Jdid, and the more modern, French colonial influenced, Ville Nouvelle. Meet your guide for a half-day tour and learn about the rich history and culture as you navigate the winding streets of the medinas.

Start in Fes el Bali at the Bab Boujeloud gate and enter the main thoroughfare of Talâa Kebira. Notice the Spanish and Tunisian influenced architecture as you make your way past shops and souks (markets). Visit the Chouara Tannery and marvel at the many dye-filled stone pots and the men at work still using centuries-old techniques. Next, admire the intricate zellij tilework of the 14th-century Al Attarine Madrasa before heading over to the Mellah (old Jewish quarter and cemetery) in Fes el Jdid. If there's time, visit Ville Nouvelle to discover the dramatic change in architecture.

Day 3: Fes to Meknes, Volubilis, and the blue city of Chefchaouen

Leave Fes behind and make your way to Meknes to explore the Ville Impériale (Imperial City). Roam gardens and palaces, the impressive gate of Bab al-Mansour and the Mausoleum of Moulay Ismail. Visit the nearby Roman ruins of Volubilis, a UNESCO World Heritage site, and a sprawling complex worth exploring. Marvel at the merchant homes, temples, and colorful mosaics in situ, including the Labors of Hercules. Arrive in Chefchaouen in the Rif Mountains. Known for its blue-washed buildings in its historic medina, explore its maze-like narrow streets and alleyways which cling to the northern hillside.

Mostly untouched since the 15th century, Chefchaouen offers a relaxed atmosphere with some of the friendliest people in the country. Discover Plaza Outa el-Hammam, the main square, before enjoying a bite to eat at one of the nearby restaurants or cafés. For the more athletically inclined, trek up the hillside to reach the city walls and follow the path to Hotel Atlas. Access the rooftop and admire the expansive view over the Blue City. Towards the end of the day, walk east of the city to ascend a path to the white Spanish Mosque. Its location offers a great spot to watch the sunset behind the mountains.

Day 4: Chefchaouen to Rabat and Casablanca

Rise early to snap photos of the people-less streets before making your way south back to Casablanca. Along the way, stop in the imperial city, and present-day capital, of Rabat. Explore the Chellah Necropolis fortification in the heart of the city and wander its ruins. Enter through the grand door of the Kasbah des Oudaias into Rabat's old city center. From there, visit the 20th-century Andalusian Gardens and enjoy the serene space away from the crowds. Discover the Hassan Tower, a minaret of the incomplete mosque and Mausoleum of Mohamed V.

Return to Casablanca. Depending on your departure details, you may wish to stroll along the Boulevard de la Corniche and have a bite at Rick's Café, a bar, restaurant, and café recreated to reflect the bar in the popular movie classic, Casablanca.

Fes is home to the world's largest Old Town, meaning there's plenty to...
Best of Fes

On this 11-day tour of Morocco, you’ll begin and end your travels in...
Best of Casablanca

March is one of the nicer months to visit Morocco: it marks the start of...
Morocco Travel Advice

Caprice Y.
California, United States
"Honestly, I cannot imagine exploring Morocco without WanderLust Voyages which we found through KimKim. Our own private guide with a comfy van outfitted with ..." read more
Traveled to Morocco as a couple in April, 2022

Todd S.
the United Arab Emirates
"We had a very positive experience booking our trip with KimKim (thanks, Megan), and our trip was great too. We had originally booked our trip for March 2020…..." read more
Traveled to Morocco as a couple in April, 2022