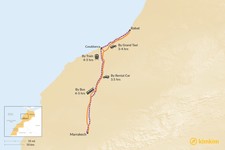 The distance between Marrakech and the coastal capital of Rabat, is 201 miles (323 km) when traveling by way of Casablanca.

The fastest and most comfortable way to get between the two cities is by private transfer, which takes just 3.5 hours. There is also the option of hiring a “grand taxi” (shared public car) or taking one of the cheap but infrequent buses.

There are no direct flights from Marrakech to Rabat; you’d have to stop through a European city on the way, making it a lengthy and inconvenient trip.

Booking a private transfer is the most convenient way to get from Marrakech to Rabat, and many travelers spend time in the city of Casablanca en route. While the city is mainly a transport and business hub, there are a few interesting sights to see, notably the Hassan II Mosque, the Casablanca Cathedral, and a cafe modeled after the famous Rick’s Cafe from the film Casablanca. Casablanca boasts a sophisticated international dining scene, making it a great place to stop for lunch.

The drive up the Atlantic coast from Casablanca to Rabat is filled with beaches and coastal getaways worth exploring, including Mohammedia and Temara. See more about this part of the route here.

Renting a car is also possible, and a few major rental car companies including Europcar exist in Marrakech. You should expect to pay cash tolls on the highway. Try to bring exact change—if you only have large bills, be sure to double-check the change that the toll officer gives you, as short-changing at toll booths is a common scam. Always follow the speed limit when driving in Morocco to avoid fines.

Trains run from Marrakech to Rabat every few hours, from early morning until about 9 PM. Tickets can be purchased at the station, and schedules can be viewed on the official ONCF website.

While trains in Morocco are slow and sometimes run late, the ride is generally comfortable. You will have the choice to purchase either first class or second class tickets. Refreshments and toilets are usually available onboard the train (although it’s wise to bring your own snacks just to be safe, particularly during the month of Ramadan).

In Morocco, a “grand taxi” is a private car that transports passengers for long-distance journeys. These cars are usually shared, so prepare to share your space with up to 5 other passengers, unless you pay a higher fee to buy up all the seats in the car. The car will leave once all the seats are full, or have been paid for.

The grand taxi station is located north of the Medina in Marrakech. Taking a grand taxi between Marrakech and Rabat will be quite a bit more expensive than taking the train or bus. Be sure to ask about the price beforehand. It is useful to have small bills with you since some taxi drivers will claim not to have change.

The two main bus operators in Morocco are CTM and Supratours.

Supratours is run by the ONCF, Morocco’s official train operator, and is intended to supplement the train service. Since there is already a direct ONCF train line running from Marrakech to Rabat, Supratours does not run on this route.

CTM does offer a service between Marrakech and Rabat. The price is similar to the train. Buses leave once every few hours in the morning and afternoon. Schedules can be viewed on the CTM website, and tickets can be purchased at CTM’s office in Marrakech.

How to Get from Marrakech to the High Atlas Mountains

Marrakech is just 55 miles (90 km) from Imlil, a small town and popular...
Getting Around Morocco

Jamal S.
Texas, United States
"I wanted a very special birthday gift for my wife, Hanan, and I always knew that she is in love with Morocco and Moroccan traditions and culture. Didn’t ..." read more
Traveled to Morocco as a couple in January, 2023
D
Debra S.
Ireland
"Myself (Irish) and two of my friends (Canadian) spent 10 wonderful days travelling from Marrakech around the North of Morocco with lots of stops along the w..." read more
Traveled to Morocco as a group in January, 2023

Priya V.
Michigan, United States
"We had a wonderful time! We enjoyed the various terrain, nature and experience food and culture from different parts of Morocco. Especial thanks to our ..." read more
Traveled to Morocco as a couple in January, 2023