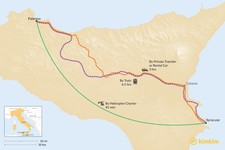 Traveling across Sicily from Palermo to Syracuse is a 162-mile (261 km) journey that begins along the Tyrrhenian Sea and cuts south across the heart of the island, regardless of what form of transport you choose. Winding your way through the hills that dot the landscape takes some time, so expect to spend at least three hours in transit.

Rental cars are easily accessed in Palermo and will give you the freedom to take your time and stop along the way. Private car transfer takes a similar amount of time. Taking the train is another option, but it takes longer, closer to 4.5 hours. For a particularly luxurious option, splurge for a chartered helicopter, a short 45-minute ride.

Consider one of our Sicily itineraries that include both Palermo and Syracuse, including the Best of Sicily 7-Day Tour, the 15-day option—perhaps combine two of our trip plans, pairing Sicily's West Coast in 7 Days with Southeast Sicily in 7 Days.

Palermo has many major rental car services, including Hertz, Avis, and Europcar. Be sure to have GPS included, as Sicily is notorious for having some complicated roads, so you'll need some help, especially if you go a bit off the beaten path. For a few side trips along the journey, consider visiting the UNESCO World Heritage sites of Villa Romana de Casale—an ancient Roman villa known for its mosaics—or Caltagirone, a small city known for its Late Baroque architecture.

Remember that renting a manual (stick shift) auto means much-reduced pricing in Italy; and remember that gas is expensive here—the prices you see are liters, not gallons (it takes almost four liters to equal a gallon).

Hiring a private car transfer service puts the driving into a local's hands, which is often a good thing on Sicily's sometimes complicated roads. You can hire a car by size, choosing a luxury sedan for added comfort or a van, allowing for a larger group to travel together. Your local specialist can help you decide whether to book by the trip or by the hour; by the hour gives you the flexibility to stop and visit a few sights along the way.

Trenitalia runs train service between Palermo and Syracuse, with two nonstops per day (early morning and early evening). Other options include trains that make a stop in Catania, which actually doesn't add much time to the trip. This is the most economical way to travel between the two cities.

Chartering a private helicopter in Sicily is expensive, but if you're in a hurry or have always dreamed of seeing Mt. Etna from the sky, that option might be the one. The ride will most likely cost $3,500 for up to five passengers. Where you are picked up and dropped off can be negotiated, but be aware that the closest airport to Syracuse is in Catania, which is an hour drive north of the city—so you'll need to rent a car or hire a transfer from there.