Explore the highlights of Sicily beginning in its capital of Palermo. In this cultural melting pot, the aromas of exotic spices carry from backstreet markets to cobbled throughways lined with Arab-Norman buildings. Then it's off to the Baroque gem of Catania, where en route you'll stop at Greco-Roman ruins and medieval fortress towns guarding long stretches of postcard beaches.

Welcome to Sicily! you'll begin your adventure in the regional capital of Palermo, which boasts lovely Mediterranean coast and rich history dating to the Roman, Byzantine, Arab, and Norman eras. You'll see these influences represented in Palermo's architecture, culture, music, and cuisine. Upon arrival at the airport, you'll transfer 45 minutes to your hotel in the heart of the city to settle in. The rest of the day is yours to spend as you like.

The historic city center and medieval streets are easy to navigate by foot, with many attractions and restaurants within walking distance. To get your bearings, take a passeggiata (stroll) along the narrow Via Maqueda, a pedestrianized thoroughfare that connects the north of the city to the south. For a fine example of Baroque architecture, start at the Fontana Pretoria (fountain) in Piazza Pretoria.

One great way to experience Palermo is on a street-food tour. Snack your way through the city's historic streets while visiting back-alley markets, modest bakeries, old bars, and various food stalls while on the hunt for sweet and savory eats.

You'll meet your guide in the morning and meander over to the Vucciria and Capo open-air markets. These are so abuzz with activity that they're reminiscent of Arab souks. Here you'll discover how Sicily’s unique culinary history informs its street-food scene as fishmongers, butchers, and produce vendors proffer their goods.

Throughout, you'll visit bakeries, cafés, and food stalls to try a variety of popular Sicilian street snacks including pani câ meusa (sesame-flavored bread stuffed with fried veal and spleen), panelle (chickpea fritters) and arancini (deep-fried balls of rice stuffed with meat, vegetables, and cheese). Wash it all down with sweet Sicilian wine before digging into a seasonal dessert like cannoli (deep-fried pastries filled with sweet ricotta cheese), gelato, or a refreshing granita (a fruity semi-frozen treat).

This morning you'll head west along the coast to the medieval town of Erice. Perched on a cliff and offering magnificent views, Erice is famous for its winding streets, stone archways, and decorated courtyards. Enter by the Porta Trapani then walk to the historic city center and the 14th-century Duomo. Follow the ancient city walls to the Castello di Venere, a 12th-century Norman defensive fortress which houses ruins of a Roman spa and the Temple of Venus.

When you're ready, make the short trip down to Trapani. Shaped like a sickle, this town sits at the foot of Mount Erice, along the western tip of Sicily, and acts as a gateway to the Aegadi Islands. Settled in the 13th century BCE by the Elymians, its Old Town is easily walkable and features a number of notable monuments and churches, most of which date to the late medieval period and the 17th/18th centuries.

This morning you'll cut across the island to the east coast and Catania, stopping first on the southern shore at Agrigento's UNESCO World Heritage archaeological site. Here you'll meet a licensed guide and tour the ruins of the ancient city of Akragas in the Valley of the Temples, so named for its well-preserved Greek temples. An example is the Temple of Concordia, one of several ridge-top ruins that once served as beacons for homecoming sailors.

Afterward, you'll continue east to your hotel in Catania. Sicily's second-largest city after Palermo, Catania sits at the foot of Mount Etna on the Ionian Sea and begs to be explored. Having suffered from a massive eruption of Mount Etna in 1669, followed by an earthquake in 1693, Catania was largely rebuilt during the Baroque era and has some stunning buildings to show for it.

Plan your trip to Italy
Customize your trip with help from a local travel specialist.
Plan Your Trip

Take the day to immerse yourself in historic Syracuse, a UNESCO World Heritage Site. Renowned for its rich Greek history, culture, architecture, and for being the birthplace of the mathematician Archimedes, Syracuse was long regarded as one of the major powers in the Mediterranean.

Dedicate the morning to exploring the ancient ruins of the Ionian coast on a guided tour of Syracuse (about three hours). Venture to the Neapolis Archaeological Park for a stroll among the ruins and ancient relics with your expert guide. Learn about the region's Greek and Roman history as you explore the architecture and continue the walking tour through Ortygia—Syracuse's beautiful old town, which is located on a spit of land extending into the Mediterranean.

Afterward, you'll have the afternoon free to enjoy at your own pace. Lose yourself in Ortygia's winding streets as you visit tucked-away gems like the 19th-century Palazzo Impellizzeri, the Temple of Apollo in Piazza Pancali, or go underground to the San Giovanni Crypt and Catacombs, which date to the 6th century. Alternatively, for some relaxation, you can sunbathe next to turquoise waters at Arenella Beach, just 20 minutes south of Syracuse.

Get an early start today and head inland toward Europe's largest active volcano, Mount Etna. You'll begin a guided hike at the Rifugio Sapienza, the southern access point to the volcano. Rent any walking equipment you may need and then ride the cable car up 9,500 feet (2,900 meters) to Torre del Filosofo, the last lookout point before the summit. Take in the breathtaking vistas of solidified lava flows, fumaroles, and views that reach the Mediterranean.

Upon returning to the car, you'll continue to Taormina, a famous resort town on the Ionian Sea. The ancient Greek theater here, which is still used for live performances, makes Taormina the perfect destination for fans of the arts. On a self-guided tour, you can visit the 10th-century Palazzo Corvaja, the restored 17th-century Santa Caterina Church, and perhaps stroll along Vicolo Stretto—the narrowest street in town.

If there's time before catching your departure flight, you might like to enjoy one last granita and do a little souvenir shopping at the Catania's Fera o'Luni market. Held daily in Piazza Carlo Alberto, the market sells everything from street food and fresh produce to local crafts and antiques. At the appropriate time, you'll transfer to the airport for your flight home. 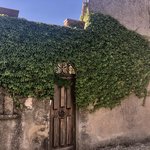 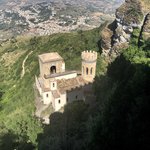 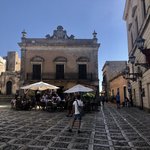 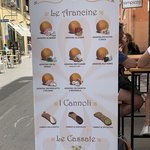 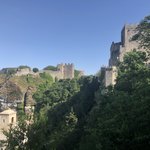 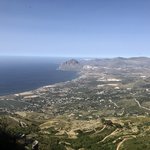 With three days you can encounter a slice of Sicily and its wonderful...

Sicily's first month of the year is also its wettest. But with the rainy...
Best of Sicily

With a week in Italy, you could see the highlights of two or three major...

Many travelers with 10 days to spend in Italy choose to explore two to...

With two weeks in Italy, you can see many of the country's top sights in...
Make the Most of Your Time in Italy

When should you go to Italy? Summer is very warm, especially in the...

Tuscany is a fantastic destination throughout the calendar year. But...

Getting lost in the mazy streets of a tucked-away hill town is one of...

From Florence, the symbol of the Renaissance, to the vistas of the Val...

For most travelers, 7 to 10 days is the perfect amount of time for a...

Discover the best of Italy's northern regions, starting in the medieval...

How to Get from Sicily to Puglia

The distance between Sicily and Puglia is approximately 344 miles (554...

How to Get from Florence to Sorrento

How to Get from Alberobello to Lecce

Alberobello and Lecce are just 67 miles apart, and the fastest ways to...
Getting Around Italy