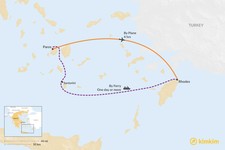 The distance between Paros in the Cyclades and Rhodes in the Dodecanese is 176 miles (283 km).

It’s rare to find direct flights running between Greek islands, and the route from Paros to Rhodes is no exception. However, you do have the option of flying with a transfer through Athens. This is the fastest option, although flight availability is sporadic.

There’s also no direct way to get between the two islands by sea, unless you have private water transport. You’ll have to get a ferry from Paros to another island, and then travel onward to Rhodes.

Once you get to Rhodes, there’s lots to see, from medieval architecture to white-sand beaches. If you’re eager to experience even more of the Dodecanese, you can do so with this four-day sailing itinerary.

It’s challenging to find connecting flights from Paros to Rhodes. However, if you’re lucky, you may find a flight that works for your travel dates.

Several airlines operate flights on this route, with layovers in Athens. The flight from Paros to Athens takes 40 minutes, and from Athens to Rhodes takes one hour. It’s a good idea to double-check how long your layover will be, as connections can be as short as half an hour⁠—this may be a bit of a rush when trying to catch your second flight.

Duration: one day or more

You can also get from Paros to Rhodes by traveling to an island between them, and then catching another ferry to your final destination.

There are several islands where you could stop off, including Crete or Astypalea, among others. But one of the most popular islands in this area is Santorini (Thira).

Several ferries leave daily from Paros to Santorini. Ferries can be booked in advance, or at the port.

You can bring cars on certain ferries for an additional fee. However, some rental companies won’t allow you to transport cars between islands, so be sure to check with your company if you intend to bring a car with you.

All ferries leave from Paros’ main port, in the center of Paros Town. Most sail in the late morning and afternoon, and take 2-3 hours to make the journey.

There are plenty of sights to check out on Santorini, like Oia’s iconic buildings or the ruins of Akrotiri. It’s worth spending a day or two on the island, if you have time—the ferries to Rhodes don’t leave until early in the morning, so you’ll need to stay at least one night.

When you’re ready to make your way to Rhodes, you can catch another ferry from Santorini’s port. There are only a few ferries per week, so it’s worth booking in advance. High-speed ferries can take as little as eight hours, while the regular ferry takes 21 hours.

Hit three major hotspots on this tour of some of Greece's most beautiful...

Experience six islands in 7 days with this boat trip around the...

Off the Beaten Path in the Cyclades: Paros & Naxos - 8 Days

The stunning Cyclades are a group of Greek islands famous for their...

Let this 10-day itinerary take you through some of Greece's most...

Lisa D.
Ohio, United States
"Trip was wonderful. Christos picked great hotels with perfect locations. Drivers waiting for us made things so easy! Bike trip in Athens was very fun and we ..." read more
Traveled to Greece as a couple in June, 2022
Plan your trip to Greece
Customize your trip with help from a local travel specialist
Plan Your Trip