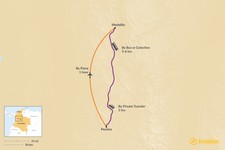 The distance between Pereira to Medellín is 262 miles (423 km). Flying is the easiest way to travel to Medellín from Pereira, which takes less than an hour via a direct flight. Going by private transfer is also an option—the route takes about five hours, depending on the frequent delays due to accidents and roadwork. Self-driving is not recommended on this route. Buses and colectivos, or shared vans, are also available, though public transport is less comfortable/convenient (and colectivo rides can be a white-knuckle experience).

You might consider this 7-day itinerary—it includes a visit to Medellín, an overnight at a coffee finca in Pereira, and three days of exploration in Cartagena.

The Aeropuerto Internacional Matecaña (PEI) in Pereira has daily direct flights to Medellín. The airport in Pereira is just one mile (2 km) west of the city. It should be noted that there are two airports in Medellín—most direct flights from Pereira to Medellín fly mainly to Aeropuerto Olaya Herrera airport. Olaya Herrera (EOH) is inside city limits near the Terminal del Sur bus station.

A few times a month in the evening, there are also direct flights from Pereira to Aeropuerto Internacional José María Córdova (MDE) located in nearby Rio Negro, about 21 miles (35 km) from Medellín's city center. From this airport, you can take a taxi directly to most hotels in the city for a flat fee or hire a private transfer. Direct flights usually take less than one hour. Other non-direct flights often have a layover in Bogotá and arrive at both airports in Medellín.

It is not recommended to rent a car unless you're used to driving on high mountain roads with death-defying curves, with obstacles such as roadwork and landslides. It’s recommended to leave the driving to the professionals. The trip is about 4 hours from Pereira to Medellín. Private transfers are recommended over self-driving, though it can be an expensive option at this distance.

By Bus or Colectivo

From Pereira's main station, Terminal de Transporte, you can also catch a bus to the Terminal del Sur in Medellín. This is an affordable option and takes about six hours, depending on traffic.

If you're looking for a budget-priced adventure, you might also be able to catch a colectivo, a shared van widely used by locals that has no set schedule. Colectivos dart quickly around traffic, so you’re likely to arrive in Medellín in five hours or less. Keep in mind that colectivos depart only when they are full, and be prepared for a bumpy ride.

From the up-and-coming city of Medellín to the lush green mountains of...

Simon K.
New Jersey, United States
" In one word "EXCELANT". I would like to say as a traveling person, the trip that we had to Colombia was more than what we expected. Other than the beautifu..." read more
Traveled to Colombia as a group in October, 2021

Todd W.
California, United States
"In Bogota, I was very pleased with my guide Mafe, as well as the driver(s), and my guide Lina for a game of Tejo. In Medellin, I was also extremely happy wit..." read more
Traveled to Colombia solo in October, 2021

Edgar A.
Illinois, United States
"My trip to a new foreign land was an amazing experience. The food, the culture, the architecture, the people and the weather were something I will always che..." read more
Traveled to Colombia as a group in April, 2021
S
Sabena K.
Florida, United States
"My friend and I had such a wonderful and memorable time in Cartagena and Santa Marta. Margoth did an amazing job organizing and suggesting activities, trans..." read more
Traveled to Colombia as a couple in December, 2020
Create your custom-made trip to Colombia
Get Started