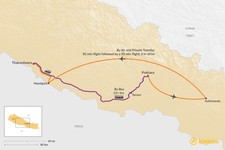 By Air and Private Transfer

There are no direct flights between Pokhara and Nepalganj, the nearest city to the Bardia National Park. Travelers wanting to get there by air will need to first fly east to Kathmandu before connecting to another flight back west to Nepalganj. While this sounds a bit inconvenient, it will still save you time and the discomfort of going overland, so is the recommended option.

Flights from Pokhara to Kathmandu take less than 30 minutes. Once you're in Kathmandu, flights leave for Nepalganj several times a day. They take about 50 minutes. Try to get the first flight out of Pokhara, so you can connect to an early flight from Kathmandu to Nepalganj and still have plenty of time for your overland journey to the park itself. Be aware that flights from Pokhara and Kathmandu are quite often delayed due to the weather.

Traveling from Pokhara to Bardia by bus is only worthwhile if you're on a very limited budget, as it's a long and tiring journey, and not very safe. There are no comfortable tourist buses plying this route (as there are between Pokhara and Chitwan and elsewhere) so you'll have to get a local bus. Nepal's roads are generally not in very good condition, and you're likely to feel every bump in the road while traveling on a local bus.

On the first part of the journey you'll travel south-west through the hills to Tansen. If you're not in a hurry and want to spread this journey over a couple of days, Tansen's a worthwhile place to stop for a night or two. The road then continues south to Butwal, and then west along the Terai, the plains bordering India, before reaching Nepalganj.

From Nepalganj you'll need to get another bus to Bardia (Thakurdwara). Local buses between Nepalganj and Thakurdwara leave a few times a day. If you arrive in Nepalganj late at night you'll probably need to spend the night. Alternatively, you can pre-arrange a transfer through your Bardia accommodation, as travelers who fly to Nepalganj tend to do.

While this overland road journey can be made via private transfer, which will be much more comfortable, this is still a long trip and quite an expensive option. We recommend that travelers on a more generous budget fly instead.

This trip combines the main cultural and natural highlights of Nepal's...

Combine two classic Nepal experiences: the Ghandruk trek in the...