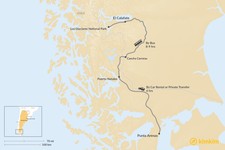 The distance between Punta Arenas in Chile and El Calafate in Argentina is 305 miles (492 km). The best travel option to get between the two destinations is to hire a private transfer for the six-hour drive. However, if you're planning on traveling back to Chile after exploring this region of Patagonia, consider renting a car.

You can also catch a bus, but you'll have to take a smaller bus or private transfer to the nearby bus station in Puerto Natales and then take the bus to El Calafate. Although it is possible to take a flight, this option is not recommended as it requires at least two layovers, making it the most time-intensive option.

If you're interested in spending more time hiking on glaciers and seeing the Salto Grande waterfall, consider this 8-day itinerary that takes you from Torres del Paine to El Calafate.

There are many private drivers for hire and international car rental companies in the center of Punta Arenas, so tracking down your preferred option should be simple.

The drive down highway RN40 takes about six hours, but you have the flexibility to plan stops in some of Argentina's best ecotourism spots. About three and a half hours into your drive, you'll be able to stop in Torres del Paine National Park for pristine mountain views. Puerto Natales, and Laguna Blanca.

Along with views from the famous Muelle Brown & Blanchard Pier, Puerto Natales also makes a great stop for food. As you continue on your journey to El Calafate, you'll know you're almost at your destination when you see Mount Fitz Roy.

You can also stop in Torres del Paine National Park before taking the next bus or transfer to El Calafate, so consider this option if you'd like to see the breathtaking Los Glaciares National Park.

Romkaew B.
Massachusetts, United States
"Nicholas’s trip preparation for us was fantastic. We got to see what we wanted from the lake region to Patagonia to Iguazu Falls within our budget. The ..." read more
Traveled to Chile as a family in December, 2019
Create your custom-made trip to Chile
Get Started