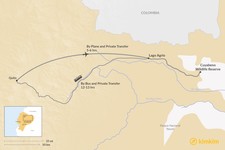 The Reserva Producción Faunística Cuyabeno, more commonly known internationally as Cuyabeno Wildlife Reserve, is one of Northern Ecuador's little-known gems. In the Oriente, Ecuador's section of the Amazon Basin, this is a bastion of wildlife that gets little attention besides the more famous Yasuní National Park, but the 2330 square mile reserve has wildlife a-plenty, and also the Cofán people who live here in the south of the reserve.

Around 250 miles east of Quito, Cuyabeno Wildlife Reserve is remote. You have to enter the reserve on a guided tour. A tour will involve bumpy 4x4 travel and extended boat travel, often by canoe, and you will likely stay on lodges located within the reserve. Lago Agrio is the base for most trips, with packages generally including travel to/from Lago Agrio but rarely from Quito. Lago Agrio can be reached by plane or by bus, but from there it is essential to be part of a tour group. Tours are usually arranged in Quito but can also be arranged in Lago Agrio.

The easiest, quickest and most expensive way to get from Quito to Cuyabeno Wildlife Reserve is this. Two flights from Monday to Friday and one flight on Sunday currently connect Quito and Lago Agrio. These flights are operated by TAME and take around 55 minutes. However, because of flight timings it is not always possible to begin the trip to Cuyabeno Wildlife Reserve the same day; some tour operators will connect with the morning plane and some will begin the tour the following morning, meaning an overnight stay in Lago Agrio.

Transport from Lago Agrio to the Cuyabeno Wildlife Reserve lodges takes around four hours, although individual lodges do usually specify the exact travel time on their websites.

The duration quoted above does not include an overnight stay in Lago Agrio en route.

By Bus and Private Transfer

This is the cheapest, slowest and least expensive way to get between Quito and the reserve. The main reason travelers take this option is to save money on the higher prices for the tours offered in Quito by purchasing the very same tour in Lago Agrio instead.

Bus travel time from Quito's Terminal Terrestre Quitumbe bus station to Lago Agrio is around eight hours, and there are regular departures almost every hour during the day and often at night (some buses terminate in Lago Agrio and some will be continuing to Coca).

In Lago Agrio, you will then have to purchase your tour. Lago Agrio tour agencies are not quite as user-friendly as Quito tour agencies and many staff may not speak English. Plan on arriving on a bus in the early afternoon, leaving you sufficient time to check out tour options. You will then be able to depart on the tour to the Cuyabeno Wildlife Reserve the following morning.

See the above option for more on traveling from Lago Agrio to the Cuyabeno Wildlife Reserve.

The duration quoted above does not include an overnight stay in Lago Agrio en route.

This action-packed 7-day tour of Ecuador is perfect for travelers...

Leave the cold climes of Quito and descend to the sinuous rivers and...

This weeklong itinerary is perfect for travelers who are interested in...

This eight-day itinerary is perfect for travelers hoping to see...

Vivian Z.
New York, United States
"We had an amazing 12 days tour in Ecuador. the beautiful landscapes around the highlands of the Andes, the adventure in Amazon rainforest basin and also the..." read more
Traveled to Ecuador as a couple in November, 2022

Autumn J.
Michigan, United States
"I can’t tell you how perfectly our custom-made Ecuador itinerary turned out! Linda, our travel specialist, was incredible. She not only helped us to plan an ..." read more
Traveled to Ecuador as a couple in November, 2022

Minda H.
Minnesota, United States
"Lucia put together a trip that hit all the things we wanted to experience. Our guide and driver, Sebastian was terrific. He was a cautious driver and an ent..." read more
Traveled to Ecuador as a family in November, 2022

Andrea R.
Maryland, United States
"Milton was our guide and he was always attentive, informative , and patient. Was an absolute pleasure to be around and always made us feel comfortable i cann..." read more
Traveled to Ecuador as a family in November, 2022

Kathleen W.
Georgia, United States
"This trip was an absolute blast and made so easy to plan with Daniel's help! It was really neat that we got to meet him upon arrival too :). Everything wa..." read more
Traveled to Ecuador as a group in March, 2022

Renee E.
Canada
"Jackie was a complete delight to work with. She was knowledgeable, professional, enthusiastic, and totally engaged with us as clients. We had booked a Galapa..." read more
Traveled to Ecuador as a couple in October, 2022
B
Bree M.
Connecticut, United States
"Absolutely fantastic experience! Our coordinator, Linda, was extremely responsive, easy to work with, and listened to all of our requests when planning our t..." read more
Traveled to Ecuador as a group in September, 2022