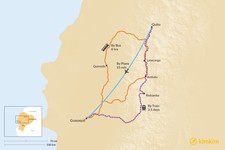 Traveling between Quito, Ecuador's capital, and its biggest city, Guayaquil, is an understandably popular journey to make. Guayaquil is also a departure point for trips to the Galapagos. See here for a 6-day Galapagos itinerary. Quito sits at 9180 feet altitude in the Andean central highlands and Guayaquil sits on the steamy southern coast, so the journey is a big change in terrain and elevation and temperature (get ready to peel off the layers if you start in chilly Quito by the time you arrive in Guayaquil).

There are three main ways to get between the two cities: by air, by bus and by train.

By far the most convenient way of traveling between Quito and Guayaquil is to fly. There are at least fifteen flights daily, departing at least every two to three hours throughout the day. The main airlines flying this route are Latam, Avianca and Tame.

The best views are on the left-hand side of the plane.

The cheapest and most popular with locals as a means of travel between the two cities, buses are also the most regularly departing mode of transport with departures every hour during the day and most hours during the night too. Departures are from Terminal Terrestre Quitumbe, which is located 7.5 miles southwest of Quito Old Town. Buses run either via Ambato in the highlands or Quevedo.

The most expensive, least popular and longest way to get from Quito to Guayaquil is to take the train. In recent years Ecuador's railway network has seen massive investment and restored many trains, primarily as expensive tourist routes such as the Quito-Guayaquil train known as the Tren Crucero. It is one of South America's most luxurious train rides, and the train leaves on Tuesdays from Quito's Estación de Chimbacalle two miles south of Quito Old Town. It takes the best part of four days to arrive in Guayaquil, arriving on Friday evening (it stops off in fixed accommodation in towns en route, such as Latacunga, Riobamba and Alausi and these accommodations are included in train ticket prices). Arrival is into Estación de Durán, across the river from Guayaquil.

This action-packed 7-day tour of Ecuador is perfect for travelers...

Leave the cold climes of Quito and descend to the sinuous rivers and...

This weeklong itinerary is perfect for travelers who are interested in...

This eight-day itinerary is perfect for travelers hoping to see...

Autumn J.
Michigan, United States
"I can’t tell you how perfectly our custom-made Ecuador itinerary turned out! Linda, our travel specialist, was incredible. She not only helped us to plan an ..." read more
Traveled to Ecuador as a couple in November, 2022

Minda H.
Minnesota, United States
"Lucia put together a trip that hit all the things we wanted to experience. Our guide and driver, Sebastian was terrific. He was a cautious driver and an ent..." read more
Traveled to Ecuador as a family in November, 2022

Andrea R.
Maryland, United States
"Milton was our guide and he was always attentive, informative , and patient. Was an absolute pleasure to be around and always made us feel comfortable i cann..." read more
Traveled to Ecuador as a family in November, 2022

Kathleen W.
Georgia, United States
"This trip was an absolute blast and made so easy to plan with Daniel's help! It was really neat that we got to meet him upon arrival too :). Everything wa..." read more
Traveled to Ecuador as a group in March, 2022

Renee E.
Canada
"Jackie was a complete delight to work with. She was knowledgeable, professional, enthusiastic, and totally engaged with us as clients. We had booked a Galapa..." read more
Traveled to Ecuador as a couple in October, 2022
B
Bree M.
Connecticut, United States
"Absolutely fantastic experience! Our coordinator, Linda, was extremely responsive, easy to work with, and listened to all of our requests when planning our t..." read more
Traveled to Ecuador as a group in September, 2022