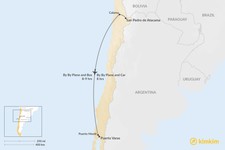 The distance between San Pedro de Atacama and Puerto Varas in the southern Chilean Lake District is 1,640 miles (2,640 km). There are two main options to travel between the two places and they both include a flight and a bus ride or a car. You can either fly via Osorno or Puerto Montt with the latter being one hour shorter with a total time of eight hours. Since you'll have to fly to Calama either way, the route via Puerto Montt is recommended. Puerto Varas is close to Osorno and Puerto Montt so whichever you choose you'll get a chance to visit both.

A tip is to rent a car instead of taking the bus once you arrive in Puerto Montt or Osorno. Since the surroundings have so much to offer, such as the Vicente Pérez Rosales National Park, having your own car is really useful. Take look at this Lake District itinerary and pick your favorite places to explore around Puerto Varas.

Your first part of the journey from San Pedro de Atacama to Puerto Varas will start by taking a shuttle or transfer to Calama El Loa Airport (CJC). This will take 1-1.5 hour and from here you'll be flying to either Osorno or Puerto Montt which takes 4.5 hours. If you decide to fly to Puerto Montt, the remaining journey by car will take only 30 minutes and if you land in Osorno, you can expect an hour before reaching Puerto Varas.

By Plane and Bus

Taking a flight and then a bus from San Pedro de Atacama to Puerto Varas is straightforward and comfortable. It is the exact same route as if you would drive a car, it only takes 30 minutes to an hour longer. Buses from both the Osorno Airport (ZOS) and El Topal Airport (PMC) in Puerto Montt are frequent and usually run once every hour. While the journey via Puerto Mount takes approximately eight hours, traveling via Osorno usually takes nine.

The secret's out: Chile is one of the most naturally beautiful countries...

Check off two South American countries while experiencing some of the...

Stretching thousands of miles in length, Chile can feel a world away...

Romkaew B.
Massachusetts, United States
"Nicholas’s trip preparation for us was fantastic. We got to see what we wanted from the lake region to Patagonia to Iguazu Falls within our budget. The ..." read more
Traveled to Chile as a family in December, 2019
Plan your trip to Chile
Customize your trip with help from a local travel specialist
Plan Your Trip