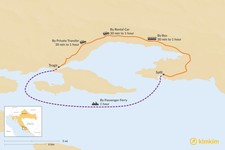 The historic cities of Trogir and Split are both UNESCO World Heritage Sites and easy to combine on the same itinerary, as they're only 17 miles (27 km) apart.

It's a short 30-minute drive from Trogir to Split, a journey that's best made by private transfer or rental car. There are plenty of buses running on this route throughout the day, and a direct passenger ferry service linking the two cities from May to October. Note that there are no train connections between Trogir and Split.

Travelers interested in exploring Croatia's many historical and cultural attractions can consider this 14-day tour, including Plitvice Lakes National Park, the fortified walls of Zadar, Dubrovnik's old town, and more.

If you're on a self-driving tour of Croatia, you'll find it's an easy drive from Trogir to Split. Take Ivana Pavla II Road eastwards towards Split for the shortest and quickest route. Another option is to take the Dr. Franje Tuđmana coastal road for a more scenic (and slightly longer) drive.

Travelers who prefer to set their own schedule and leave the driving to a local can consider making the trip from Trogir to Split by private transfer. For details, contact your travel specialist.

Trogir is linked to Split by a regular bus service. There are several buses leaving each hour from Trogir's bus station. These are long-distance buses which can be reserved in advance via the bus companies' websites. If you're traveling during the peak summer season, this can be a good idea. Arriva is currently the only bus company that offers free wifi onboard its buses.

There are also public buses run by Split's public transit system on this route, with two or three departures every hour. Bus route 37 makes several stops along the way, including Split airport, which makes the journey longer.

Bura Line operates passenger ferries from Trogir to Split from May to October. During the months of July and August there are up to six departures a day.

Mljet is a popular island with visitors to Croatia and easy to get to...

Judy S.
California, United States
"I cannot speak highly enough of our trip planned through kimkim and especially, Antonia Ljustina of Croatique. Antonia listened carefully to my interests an..." read more
Traveled to Croatia as a couple in August, 2021