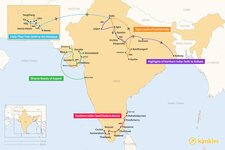 Focusing on the highlights of one of India's regions in 12 days makes for an excellent introduction to this vast county. Lovers of architecture and history will not be disappointed: each corner of India is chock full of heritage monuments and impressive sacred sites. Nature and wildlife lovers can opt for one of the national parks, while those looking for an adventure will be fascinated by the rugged beauty of Ladakh, tucked in the Himalayan mountains.

This 12-day highlights itinerary packs in some of the most iconic spots in Northern India, including the Golden Triangle of Delhi-Jaipur-Agra. It provides an excellent introduction for first-time visitors, with a few standout experiences thrown in, including the chance to see the sun rise over the Taj Mahal, a boat trip on the Ganges River in Varanasi, and a Delhi street food tour.

Your 12-day adventure begins in Delhi, where you'll marvel at the India Gate memorial, historic Mughal-era Red Fort, and 17th-century Jama Masjid, one of India's largest mosques. An evening food tour will introduce you to tasty snacks served by curbside vendors. Your next stop is Jaipur, Rajasthan's pink city, making a halt at the famed Monkey Temple. The following day starts with a sunrise bicycle tour, a visit to the City Palace, and UNESCO-listed Amer Palace Fort before ending the day with a cooking class.

This 12-day temple and tiger tour of Central India combines historical sites with nature and wildlife. Historical highlights include a sightseeing tour of the bustling capital Delhi, a sunrise visit of the iconic Taj Mahal in Agra, and the UNESCO-listed Khajuraho Temple. Spot tigers and other wildlife during the sunrise and sunset wildlife safaris through two of India's most significant national parks.

The second part of the tour has an outdoorsy theme. On Day 7, you'll arrive at Bandhavgarh National Park in time for a sunset safari and the chance to spot Bengal tigers, wild boar, leopards, spotted deer, jackals, and sloth bears. These elusive animals need time; that's why you can join sunrise and afternoon safaris the next day. You'll spend the following two days at Kanha National Park, a tiger reserve since 1973. On Day 11, you'll catch a flight from Jabalpur to Delhi, from where you'll depart the next day. Learn more

This well-rounded 12-day itinerary showcases the highlights of the southern states of Tamil Nadu and Kerala. Explore UNESCO World Heritage Sites and some of South India's most impressive temples. Then experience the hilly landscapes of the Western Ghats mountain range, take a stroll through tea plantations, and a slow sail along the serene Kerala backwaters.

On arrival at Chennai airport, your driver will whisk you off to Mahabalipuram, the first stop of your tour. Marvel at seventh and eighth-century UNESCO-listed monuments, including the Shore Temple and Rathas—temples shaped as chariots. Next, you'll take a drive to charming Pondicherry, a former French colonial town on the Bay of Bengal. On the way to Thanjavur, you'll stop at the Nataraja Temple in Chidambaram, dedicated to Shiva in his form as the Lord of Dance, and two UNESCO-listed temples: the Brihadisvara Temple in Gangaikonda Cholapuram and Airavateswara Temple in Darasuram.

In Tanjavur, explore the great Brihadishvara Temple before moving on to Chettinad to see its richly-decorated palatial mansions and Thirumayam Fortress. You'll continue to Madurai the next day, home to the Sri Meenakshi Amman Temple, one of South India's biggest. Then it's on to Kerala via the hilly Western Ghats and a stop at a tea plantation. Visiting a spice plantation is another highlight, as is the Periyar Tiger Reserve, a performance of the martial art kalaripayattu, and a cruise of the scenic backwaters on a traditional boat. Your tour ends in charming Fort Cochin. Learn more

This 12-day trip explores the vibrant state of Gujarat, known for its age-old archaeological monuments, Jain temples and step-wells, colorful hand-woven textiles, and nature and wildlife. High points of the tour include a Jeep safari through the Little Rann of Kutch, the Islamic architecture of UNESCO-listed Champaner, and breathtaking Palitana, a Jain holy city.

Get to know the fascinating city of Ahmedabad, where your trip kicks off with a heritage walking tour. Later that day, you'll explore two Jain holy sites: the Sun Temple at Modhera and the step-well at Adalaj. Fifteenth-century Champaner is your subsequent halt, a UNESCO World Heritage Site of 114 historical monuments and Islamic buildings. Then it's on to Dasada, where you'll stay at an eco-resort set in wetlands and explore the Little Rann of Kutch on a Jeep safari the next day. A stop in Palitana is a highlight: this sacred city of 1,300 temples is a renowned Jain pilgrimage site.

Next, after seeing the picturesque Gondal and its palaces, you'll drive to Bhuj, famed for its colorful weaving and block-printed fabrics, to explore the hilltop Bhujia Fortress, the palaces of Aina Mahal and Prag Mahal, and the Kutch Museum—Gujarat's oldest. A day trip to Dholavira takes you to a fascinating 4,500-year-old archaeological site. Another must-see is Mandvi in the Gulf of Kutch on the edge of the Arabian Sea and its opulent Vijay Vilas Palace. On Day 12, you'll head to Mumbai to catch your flight home. Learn more

This adventurous 12-day hiking tour of India's Ladakh region is ideal for avid trekkers and intrepid travelers keen to learn about Tibetan culture. Follow the old Silk Road through Himalayan mountain landscapes, stopping at Buddhist monasteries and bedding down at guesthouses, campsites, and village homestays.

Your adventure begins in Delhi, India's capital, where you can relax and recover from jet lag before flying to Leh early the following day. On arrival, you'll need some time to adjust gradually to the high altitude. Spend a chilled day visiting the nine-story Leh Palace dominating the city's skyline, and browse the vibrant bazaars while imagining the time this was a trading stop on the Silk Route from China. On Day 3, you'll get an introduction to Tibetan Buddhism by exploring nearby monasteries, temples, and palaces.

Your trek begins on Day 4 with a short two-hour hike; each day, this will increase, building up to six hours of walking per day. You'll be following river paths and climbing mountain passes, including the Chamla Pass at 13,615 feet (4,150 m), one of the highest. On the way, you'll stop at Buddhist monasteries and visit a remote Tibetan Buddhist nunnery. At night you'll retire for a restful sleep at guesthouses, camps, or village homestays, staying with local families in traditional mountain villages. Learn more

Looking for more inspiration for your trip to India? Check out these other 12-day India itineraries, with outdoor adventures, cultural trips, and best-of tours to hit the highlights.

Indulge your senses on this 12-day tour of southern India, featuring the...

India's Kerala state, located in the south of the peninsula, is home to...

The western state of Gujarat is often overlooked in favor of Rajasthan...
India 12-Day Tours & Itineraries

Sohrab G.
France
"Lovely trip. Great help in planning the trip by Ravi who was knowledgeable, kind, gracious and really made us feel that he cared for us to have a great trip...." read more
Traveled to India as a family in October, 2022
Create your custom-made trip to India
Get Started