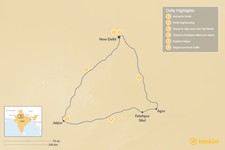 Perhaps the most popular route in India, you'll visit the three famous sites of India's northwest — Delhi, Agra, and Jaipur — known as the Golden Triangle. You'll travel by road or train tour over the course of 6 days, exploring the cultural and historical heritage of each city. This is a great tour for people's first visit to India if you're looking to see the main highlights.

Upon arriving at the international airport of Delhi in the morning, you will be greeted with a traditional welcome. Then, you will be escorted to your vehicle and taken to your hotel for the night. Check in, take your first day off, and relax!

In the morning, our sightseeing begins. We will visit the walled city of Old Delhi, where every street is buzzing with activity. The influence of the Mughals, who once ruled from the ramparts of the Red Fort, can be seen extensively.

First, we will visit Jama Masjid – the largest mosque in India, built in the 17th century. Later, we will drive past the New Delhi Area to visit Raj Ghat, India Gate, Rashtrapati Bhawan (Presidential Palace), the Parliament House, and other colonial buildings. The early 20th-century work of Edwin Lutyens, a British architect, prominently features in the colonial districts.

Today we drive south to Agra to witness the architectural wonder of the golden age of Mughals. Upon arrival, you'll be transferred to your hotel for a brief rest. Later we drive to visit the Agra Fort – a blend of Hindu and Mughal architecture — originally built by the Rajput’s and renovated from time to time by different Mughal emperors with red sandstone, bricks and the beautiful marble from Makarana. The Fort can more accurately be described as a walled palatial city.

After visiting the Agra Fort, we will visit the Taj Mahal at sunset, a symbol of eternal love that stands on the southern bank of the Yamuna River. It was built by the 5th Mughal Emperor, Shah Jahan, in the memory of his beloved wife, Mumtaz Mahal, who died in the 16th century. The charisma of the Taj Mahal never fails to impress given its beautiful symmetry and white marble inlays.

We will spend the evening visiting the bazaars, where descendants of the artisans who worked on the Taj continue to perfect their trade of marble craftsmanship.

In the morning we'll leave for Jaipur, the colorful capital of Rajasthan known as the “Pink City”. En-route, we will visit the Fatehpur Sikri, a grand, deserted, Mughal royal city. The impressive and well-preserved citadel served as Akbar’s political capital for 14 years until he abandoned it in 1585 following a drought.

Jaipur was the first planned city of its time, with imposing forts, dazzling palaces, and lush gardens. Today, Jaipur is the gateway to Rajasthan and still remains one of India’s most important heritage sites, full of historic charm. We will end the day by exploring the colorful evening markets before getting some rest for a full day of sightseeing tomorrow.

Next, we visit Jantar Mantar, an observatory built in the 18th century. Its solar devices can measure the day’s progression with an error of just 2 seconds, making it an astronomical treasure that can still accurately make predictions today.

Next, we will also visit Hawa Mahal (Palace of Winds), a five-storied facade made of pink sandstone. Built in the year 1799, Hawa Mahal and its discreet windows (Jharokhas) allowed royal ladies to watch street processions and festivities.

Early in the morning, we'll drive back to Delhi, where you'll be transferred to the International Airport for your departure.

Although the tour operates year-round, the Golden Triangle is best experienced between October and April. During this period, the weather is ideal, with average temperatures comfortably in the 70s and 80s (F). Numerous festivals and activities also take place, making for plenty of excitement. However, keep in mind that during the winter (especially around January), nighttime temperatures can dip as low as the 40s and air pollution can be a problem in Delhi. If you visit during the height of the summer (June - August), prepare for heat waves that frequently reach above 100 degrees. Starting July, monsoon rains will also be an issue, which will last the duration of the rainy season (ending in August).

This exotic itinerary is the ultimate introduction to South India's...

Immerse yourself in the vibrant colors, sights, smells, and sounds of...

Eight days will give you a quick introduction to India's two or three...

Discover the unique culture and wildlife of India’s Gujarat region on...

Discover Rajasthan's unique heritage and cuisine on this extensive...

Admire some of India's most spectacular buildings, have cooking lessons...