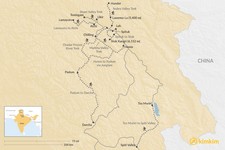 Only an hour’s flight from Delhi, Ladakh looks like nowhere else on earth. Turquoise lakes reflect snow-dusted peaks. Monasteries tower like beehives over the stark, sun-drenched hillside. The high-altitude desert, home to a welcoming Buddhist and Muslim population, is one of India’s safest and most spectacular regions. And it is best explored on foot. Here are some of the best treks in Ladakh to choose from.

Nicknamed a “baby trek,” this scenic hike through lower Ladakh starts in Likir, home to an impressive 11th-century gompa, or Buddhist monastery, with a towering gold statue of Lord Buddha. Winding through poplar-lined roads and traditional villages, it works as a great sampler for first-time visitors to Ladakh — or as a primer for more strenuous climbs. Trekkers walk only a few hours a day but be prepared for some steep slopes. Be warned, you will also pass along light traffic for part of the route.

With its heart-stopping views of purple mountains, double-humped camels, and white sand dunes, the Nubra Valley — one-time gateway to the ancient Silk Route—earns its accolades as Ladakh’s prettiest region. Traverse meadows and shrines on a week-long climb from Hunder to the high pass of Lasermo La, avoiding the throngs of day-trippers. At 5,400 m. (17,716 ft.), you’ll have unobstructed views of the Karakoram mountain range, home to K2, the world’s second-highest peak.

This adventurous teahouse trek remains Ladakh’s most popular route, and it’s not hard to see why. With multiple high passes and an elevation clocking in at over 5,100 m. (16,830 ft.), this diverse climb covers Ladakh’s picturesque ranges, rammed-earth villages, and snow-capped summits. It also dips inside Hemis National Park, a protected area sheltering Himalayan bears, foxes, wolves, and the world’s largest population of snow leopards. (Winter wildlife treks can also be arranged since you’re not likely to spot the elusive “grey ghost” during summer months.)

During Ladakh’s harsh winters, snowfall blankets mountain passes, making many areas unreachable by road. To travel between villages in the remote Zanskar region, Ladakhis began walking over frozen waters. The Zanskar river ice trek offers a once-in-a-lifetime, eight-day journey along slushy gorges and pristine icefalls, testing your mettle through surreal and risky snowscapes. With temperatures dropping to -20°F (-30°C), it’s not for the faint-of-heart.

Note: A road through Zanskar is currently under construction, which will likely impact the route. The trek is also facing another serious threat from climate change, since milder winders mean thinner ice.

This monastery circuit connects two of Ladakh’s most important religious sites. Surrounded by a moonscape of craggy desert, Lamayuru, Ladakh’s oldest gompa, has to be seen to be believed. Wander the outlying shrines, gawk at Tantric relics made from human bones, and observe monks chanting in the painted prayer hall. The trek follows the Ripchar River through a few breathless ascents, overnighting in tents pitched along the rocks. The payoff on reaching Alchi is well-worth the hike. A serene village with an adjoining monastery splayed along a tall canyon, Alchi boasts world-famous wood carvings and bright, otherworldly frescoes.

While motorcyclists clamor to the famous Leh-Manali highway, an even more memorable way to travel to the neighboring state of Himachal Pradesh is by foot. The path from Padum, former capital of the Zanskar kingdom, follows along jagged peaks, grazing yaks, and mountain streams. With overnight stops in village homestays, you’ll get a chance to sample some homemade delicacies like thukpa
(Tibetan noodle soup) or skyu (Ladakhi dumplings). You’ll end up in Lahaul Valley, an off-the-beaten-track Himachali hideaway filled with snow-dusted meadows and friendly locals.

A laid-back hike through the rolling hillside, this trek finishes with a steep ascent to Stok La, a high pass at the foothills of the famous Stok Kangri mountain at 4,855 m. (15,928 ft.) Spituk, the starting village conveniently close to Leh, is home to another unmissable monastery, so save time to check out the Thangka paintings on display. A meandering route leads to Stok, former seat of the Namgyal dynasty. The royal palace, built by Ladakhi craftsmen in 1820, is now a heritage hotel, in case you feel like upgrading your sleeping bag to a canopied bed. You might catch sight of the current king of Ladakh, who lives on the premises.

Anyone who spends time in Leh knows by heart the iconic silhouette of Stok Kangri, a snowy, razor-edged summit presiding over a rippled range of mountains. It is classified as a trekking peak, but be ready for a tough ascent. You’ll face lashing winds and a perilously slippery slope, so crampons are a must. Be sure you’re properly acclimatized before you head out, and familiarize yourself with the symptoms of acute mountain sickness (AMS).

The well-tended Hemis monastery, famous for its Buddhist mask dances, provides the starting point for this challenging climb through boulder-strewn pastures and dramatic river gorges, winding through both Markha and Zanskar valleys. Stream-crossings mount towards numerous high passes—including Zalung Karpo La at 5,200 m. (17,056 ft.)—leading to an awe-inspiring panorama over the Karakoram mountains.

Less visited than Pangong, Moriri is arguably the more spectacular of Ladakh’s two saltwater lakes. It is also a mecca for bird-watchers and a prime camping spot. Past verdant ranges and stunning overlooks, you then climb to the glacier-capped peaks of Tanglang La, marking the world’s second highest motorable road at 5,332 m. (17, 493 ft.) Arrive in Spiti, Himachal Pradesh’s best-kept secret: a remote mountain valley inhabited by monks and nomadic shepherds, and ready with postcard-ready views.

Spend nine days in northern India learning all about its food, culture,...

India's smallest state of Goa is unlike any other. Remnants of its...

Eight days will give you a quick introduction to two or three of India's...

Discover the unique culture and wildlife of India’s Gujarat region on...