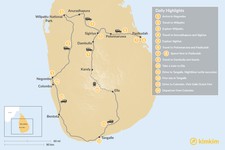 Welcome to Sri Lanka! You'll start in Negombo, known as "Little Rome" for its strong Catholic influence. The town transitioned through Dutch, Portuguese, and British colonial rule, and remnants of those cultures remain today. The city's intriguing past will reveal itself as you meander past colonial architecture and quiet canals to reach a lagoon abundant with marine life. Local fishermen have harvested lobsters, crabs, and prawns here for centuries.

Visit the local fish market in Negombo this morning before transferring to Wilpattu National Park, the largest national park in Sri Lanka. The park has an astonishing diversity of flora and fauna: it's home to over 30 mammal species, including sloth bears, Sri Lankan elephants, and spotted deer. Various wetland bird species also live here, such as the pintail, whistling teal spoonbill, and white ibis. You'll have great opportunities for wildlife viewing while on an evening Jeep safari through the park. Spend the night in a safari camp, enjoying an alfresco dinner by the lake before turning in.

Spend a full day in Wilpattu National Park today. Explore the habitat of countless native species during a safari adventure that includes breakfast, lunch, and all transportation. Keep your eyes open for the Sri Lankan Leopard, currently the largest species of leopard living in Asia—the park is one of the only places where they can be spotted. A large group of Sri Lankan sloth bears, Sri Lanka's only endemic bear species, also live within the park. If you're lucky, you will get to track down these rare creatures and observe them in their natural surroundings. After a long day, return to the camp for dinner and another overnight.

Day 4: Visit One of the World's Oldest Cities, Anuradhapura

Continue to Anuradhapura, a city with many ancient monuments and UNESCO World Heritage Sites. Founded around 377 BCE, Anuradhapura is renowned as one of the oldest inhabited cities in the world. This is a great place to learn about the great Sinhala civilization that flourished in this region when Anuradhapura was the seat of power over 1400 years ago.

Architectural and engineering marvels range from historical palaces, temples, monasteries, and ceremonial baths to the Jaya Sri Maha Bodhi. This sacred bo tree was grown from a branch of the tree under which the Buddha attained enlightenment. Another highlight is Sri Lanka's tallest dagoba (Buddhist stupa), Ruwanweli Maha Saya. After an extensive tour of Anuradhapura, transfer to Sigiriya to eat dinner and stay overnight.

Head to the ancient rock fortress of Sigiriya today, designated a UNESCO World Heritage Site in 1982. Some say the site should be named the eighth wonder of the world. The name translates to "Lion Rock," a reference to the way visitors traditionally began their final ascent to the top of the monument, passing through the open jaws and throat of a lion. Unfortunately, the only remains of this lion figure today are the gigantic paws sculpted into the side of the rock. Rising high from the jungle, the fortress is an incredible sight to see.

Plan your trip to Sri Lanka
Chat with a local specialist who can help organize your trip.
Get Started

Day 6: Tour the Ruins of Polonnaruwa

Leave Sigiriya bright and early and begin your journey to Sri Lanka's eastern shore. En route, visit the ruins of Polonnaruwa, another UNESCO-protected site that served as the capital from the 11th to 13th centuries. Enclosed by stone walls, the city was filled with palaces, shrines, monasteries, pavilions, parks, ponds, and irrigation lakes. Many of these still stand today, with the most spectacular being the Gal Vihara temple complex. The structure was cut from a single granite wall and contains dozens of statues of reclining, sitting, and standing Buddhas, making it one of the true masterpieces of Sri Lankan art.

Take the afternoon to tour the entire complex, then continue driving until you reach the coastal town of Pasikudah, where you'll spend the night.

Days 7-8: Relax by the Seaside in Pasikudah

Situated on the country's eastern coast, Pasikudah is known to have one of the longest stretches of shallow reef coastline in the world. You'll have two days to spend in this natural paradise. Walk for miles in calm, crystal-clear water, then dive or snorkel at one of many ideal spots offshore. The surrounding reef contains all kinds of tropical fish, and if you're lucky, you might even spot whales, dolphins, manta rays, reef sharks, and other exotic sea creatures.

Continue to Dambulla, known for its Cave Temple, the largest and best-preserved cave temple complex in Sri Lanka. Featuring impressive mural paintings and 157 statues, including a massive Buddha monument, it's a sacred pilgrimage site and a UNESCO World Heritage Site. The history of the place dates back to the first century BCE when King Valagambahu took refuge here. Today, it's worth visiting for the cave temple and the beautiful view over the countryside. Next, it's onward to Kandy, strategically situated between three mountain ranges, where you'll stay overnight at a boutique hotel.

After breakfast, proceed to the Kandy Railway Station. You'll spend the day traveling from Kandy to Ella on one of Sri Lanka's famous old trains. The British first created this particular train journey in the 19th century. Its primary purpose was transporting goods, mainly tea, from the area's plantations.

After enjoying a day's worth of magnificent scenery, you'll arrive in the sleepy mountain village of Ella. The town, located in the central highlands, has a wonderfully cool climate. On a clear day, you can see to the south coast of Sri Lanka. Ella is also a perfect place for relaxing, with lots of fantastic walks that lead through tea plantations to temples and waterfalls.

Leave for Tangalle, a small fishing port with reminders of the Dutch colonial era of the 18th century. Its beautiful villas look out over the shimmering beach of Seenimodera. Protected from the ocean by a reef, the palm-fringed bay and pristine coves are a natural treasure. Five species of marine turtles come ashore to nest here, and they can be observed throughout the year in their natural habitat. Unlike the turtle hatcheries on the west coast, the eggs are left undisturbed in the sand here.

Even though there is no guarantee that the marine turtles will come ashore every night, you'll have fun waiting for them on one of the world's most beautiful beaches.

Check out Best Beaches in Sri Lanka for more information on what each of Sri Lanka's beaches offer.

Today is yours to enjoy in the low-key beach destination of Tangalle. Swim, sunbathe, walk along the coast, explore charming coves and quiet beaches, or opt for a half-day excursion to one of many interesting attractions nearby. You could take a half-day excursion to Wewurukannala to see Sri Lanka's largest Buddha figure, or check out the Kalametiya Bird Sanctuary to discover marine and bird life in its many habitats. Other interesting attractions include the plateau at Ussangoda and the rock temples of Mulkirigala.

Enjoy one last beachside breakfast before heading west to Galle, the lively provincial capital and administrative center of the south, to check out the Galle Dutch Fort. A UNESCO World Heritage Site, the fortress was built by the Portuguese in 1587 and reconstructed by the Dutch. Enjoy stunning views over Unawatuna Bay and the Laccadive Sea from the fort.

Next, you'll head up the coast to Colombo. Colombo is a lively city with a fascinating history, a melting pot of cultures and commerce. Arab sailors frequented these ports to trade with the Portuguese, Dutch and British colonists that occupied the city. Visit impressive cultural sights, including Buddhist temples and Hindu kovils (a type of Hindu temple), and explore the bustling markets and bazaars of Pettah.

This morning, make time for any last-minute sightseeing and souvenir shopping before you head to the airport to catch your flight out. Safe travels!

Looking for more inspiration for your trip to Sri Lanka? Check out these other 14-day Sri Lanka itineraries, with active adventures, cultural trips, and best-of tours to hit the highlights.

This epic 14-day Sri Lanka adventure begins at the coast and heads...

This cycling tour takes you to Sri Lanka's top cultural sites and also...

This two-week itinerary around Sri Lanka offers an ideal mix of activity...

Journey through the heart of Sri Lanka on this 14-day loop around the...
Sri Lanka 2-Week Tours & Itineraries

This exciting five-day itinerary introduces you to some of Sri Lanka's...

Perfect for active families and nature lovers, this week-long summer...

With a mix of cultural highlights, hands-on activities, and plenty of...

This eight-day getaway takes you on a circular journey through the...
Best of Sigiriya

This 10-day itinerary around Sri Lanka features outdoor activities and...

See the best that Sri Lanka has to offer on this week-long itinerary...

With a colorful cultural history and rugged landscapes ideal for outdoor...

Get ready for an unforgettable journey to Sri Lanka that combines visits...
Best of Wilpattu

This relaxed 10-day itinerary around Sri Lanka is a treat for nature...

Perfect for active families and nature lovers, this week-long summer...

This exciting tour is perfect for outdoorsy types who love history and...

Discerning travelers will love this 11-day itinerary in exotic Sri...

Marvel at the diverse scenery and wildlife of Sri Lanka during this...

With 13 days in Sri Lanka, you can soak up the country's laid-back...