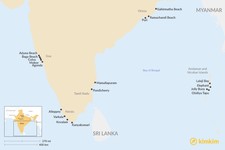 With thousands of miles of coastline, India has a beach for every taste and temperament, from untouched coves and colorful temple towns to thumping party meccas. Your only trouble might be deciding where to go - so here’s a guide to get you started.

India is one of the most culturally diverse countries on earth—with a coastline to match.  Beaches run the gamut from packed to pristine, and from religiously revered to decidedly unholy.  You have a wealth of options.  But don’t get rained out: winter is typically high-season for beach-goers, with monsoon-heavy Indian summers bringing torrential downpours.

Synonymous with its pristine and palm-fringed coastlines, the former Portuguese colony of Goa has been a beach bum’s paradise for decades.  South Goa caters to families, laid-back travelers, and honeymooners, while North Goa is a partygoer’s dream.  If tranquil, sandy waters are more your taste, head to the beaches of Agonda and Mobor in the South, stop by the classic resort town of Colva, or skip through the surf of lagoon-filled Majorda.

If it’s nightlife you’re after, hit up northern hotspots like Arjuna Beach or Baga Beach, where the pulse of club music floats through the balmy evening air and amenities cater more to jet-setters—and jet-skiers— than bliss-seekers.

Green, languid Kerala has such jaw-dropping natural splendor that the slogan tourist executives dreamed up in the 1980s—“God’s own country”— has caught on like wildfire.  And so has the state itself.  One of India’s most visited regions, this southwest stretch of coastline boasts beach idylls like hippie, health-focused Varkala, where you can watch the sun dip into the Arabian Sea from a cliff-hanging juice cafe, peaceful and popular Kovalam, located just a short drive from the capital, or the sleepy backwaters of Alleppey, where you can drift on a houseboat if you’ve had enough sand squelching between your toes.

Kerala is also the birthplace of Ayurveda, a form of traditional Indian medicine, so be sure to treat yourself to a beachside abhyanga, or therapeutic oil massage.

Dryer and less tropical than India’s western coastline, the east-facing state of Tamil Nadu has a colorful and carnival-like beach scene.  In Mamallapuram, fortune tellers and balloon vendors ply their wares along the sands, and its 8th century Shore Temple, a granite Dravidian religious structure overlooking the frothy surf, has been preserved into a museum.

In French-built Pondicherry, the rocky shore is a prime spot for scuba diving or else to enjoy a kulfi, a stick of traditional Indian ice cream, while watching the festive evening crowds. Down in Kanyakumari, India’s southernmost tip, you can behold the point where three bodies of water—the Arabian Sea, the Indian Sea, and the Bay of Bengal— all meet.  There are nearby beaches, though expect more piety than parties: it’s a popular pilgrimage point.

This off-the-beaten-track tribal state is packed with hidden marvels and heavy thrills. Ride the waves at Ramachandi Beach: newbies can time their visit in November for the India Surf Festival, where professionals lead surf and paddling workshops.  An annual sand art festival each December takes over Chandraprabha Beach, a mellow, sandy expanse near the UNESCO-protected Konark Sun Temple. Sedate beaches surround the temple town of Puri, which draws thousands of devotees to praise the saucer-eyed god, Lord Jagannath (literally, “Lord of the Universe”).

But Gahirmatha Beach plays host to an even more magnificent migration.  Located just off the Bay of Bengal, it’s the world’s biggest nesting site for endangered Olive Ridley sea turtles, and each June to December sees shores invaded by hundreds of thousands of baby hatchlings.

An archipelago of some 300 islands between India and Myanmar, Andaman and Nicobar have all the trappings of a true tropical paradise: shimmering turquoise waters, sleepy mangrove forests, and white sand beaches.  Once a penal colony under British colonial rule, the island chain also briefly came under Japanese occupation during World War II. Today, it’s a popular spot for holiday-goers around the globe, yet still remains home to several uncontacted tribes (Beware unscrupulous tour operators offering access. Though these groups are fascinating, responsible travelers should respectfully keep their distance. )

The sprawling islands have several standouts: Chidiya Tapu, near capital Port Blair, is a prime bird-watching hub, where enthusiasts can track unique finds like the ferociously-named Andaman Serpent Eagle. The beaches of Jolly Buoy, Elephant, and North Bay are all snorkeling and diving must-sees: 560 species of coral life await.  A short jungle trek leads to the seaside splendor of lush, secluded Lalaji Bay on tiny Long Island.  And the most beautiful beach in Andaman is usually heralded as Radhanagar Beach - this strip of glossy white sand and crystal-clear blue waters, a Havelock Island chart-topper on all travel lists, is also known its alluringly discrete nickname, Beach No. 7.