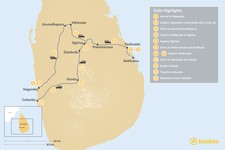 From UNESCO World Heritage Sites to tucked-away temples to bustling cities, this tour has a little something for every type of traveler. Spend your days exploring lively cities like Kandy and Negombo, snorkeling colorful reefs at Pasikudah, and wandering through ancient ruins in places like Polonnaruwa for a diverse experience in this beautiful, culturally rich country.

Welcome to Negombo — a fishing town with a fascinating past full of skirmishes between the British, Dutch, and Portuguese, and a thriving spice trade focused around cinnamon. Today, the town is a mix of cultures and religions, with Catholic churches and local traditions flourishing side-by-side. Spend some time exploring the town's old colonial architecture, temples, and beaches before returning to your hotel for dinner.

On your second day in Negombo, grab a hearty breakfast at the hotel and board a colorful tuk-tuk for a tour of the surrounding countryside. Stop in charming rural villages to experience the Sri Lankan way of life and share lunch with some locals. Then circle back to the city for dinner and a good night's sleep at your hotel.

Grab breakfast, pack your bags, and hit the road for a scenic morning drive to famed Anuradhapura! This historically rich city was the seat of power over 1,400 years ago, and many of the architectural and engineering marvels of that era still survive today. Explore UNESCO World Heritage Sites and remnants of the great Sinhala civilization. Visit the tallest dagoba, or shrine, in Sri Lanka: the Ruwanwelisaya Stupa. Wander the remains of temples, monasteries, and ceremonial baths. And visit the Sri Maha Bodhi Bo Tree, rumored to be grown from a branch of the tree where Buddha attained enlightenment while meditating over 2,500 years ago.

On your fourth day in Sri Lanka, the sacred Mihintale Mountain — regarded as the cradle of Buddhism in Sri Lanka — awaits. Explore the ancient stone architecture, shrines, boulders, and sacred caves (used by monks for meditation). Then climb the 1,840-step grand stairway to the summit for panoramic views of the countryside. After your visit, continue on to Sigiriya for dinner and a good night's sleep.

Another UNESCO World Heritage Site and one of Sri Lanka's top eco-tourism destinations, the ancient city of Sigiriya is one of the country's must-sees. Explore the monument known as Lion Rock (where visitors used to ascend through an eerie, jaw-like entrance in the rock) and then return to town for some leisure time before dinner.

History buffs rejoice! Day six starts with a visit to the UNESCO World Heritage City of Polonnaruwa with its resplendently preserved ruins. This ancient city was the capital of Sri Lanka from the 11th to 13th centuries, and today its ruins are dotted with palaces, shrines, monasteries, parks, pavilions, ponds, and irrigation lakes. The Gal Vihara temple complex, cut from a single granite wall, consists of statues of the reclining, standing, and seated Buddhas, and ranks among the masterpieces of Sri Lankan art. Explore and enjoy before boarding the transfer vehicle and continuing on to Pasikudah for the night.

Nestled along Sri Lanka's eastern coast, Pasikudah is known for its long stretch of shallow reef coastline — one of the longest in the entire world. The water is only a few inches deep for miles, so you can walk far past the shore. The barrier reef boasts not only a variety of tropical fish, but plenty of whale, dolphin, manta ray, and reef shark sightings. It's the perfect place to snorkel, dive, or just enjoy the water. When you're not snorkeling on the reef, sunning yourself on the seemingly endless beaches, or walking miles into the shallow sea, make time to visit the old Dutch fort in nearby Batticaloa, go whale watching, or treat yourself to a spa day.

Pack your bags and wave farewell to the long, lovely beaches of Pasikudah. Today, you're off to the ancient city of Dambulla, known for its beautiful, ancient cave temples and huge, modern Buddha statue. The city will wow you with its series of five caves filled with 150 images of Buddha, going back to the 1st century B.C. when King Valagambahu took refuge here.

Take your time exploring the caves, paying special attention to the second in the series — the most elaborate, large, and spectacular of the five. Here you'll find a large reclining Buddha statue and the statues of two kings. In the center of this cave is a large container to collect the water that drips from the rock ceiling even during the dry season. Step outside for sweeping views of the countryside. Then make your way back to the car and continue on to busy, vibrant Kandy.

Welcome to Kandy — the capital of the Central Province and home to the sacred Temple of the Tooth Relic, a UNESCO World Heritage Site. In the middle of a bustling city (and one of Sri Lanka's most popular places to visit), you'll find yourself surrounded by mountain ranges that were once strategic to the defense of the city. Grab breakfast at your hotel and then head out on a city tour to visit the Temple of the Tooth and the Peradeniya Botanical Garden, among other attractions.

On your final full day in Sri Lanka, make your way back to the coast — this time to the lively, culturally diverse city of Colombo. Ancient Arab sailors frequented these ports to trade with the Portuguese, Dutch, and British colonists that occupied the city. Today, the city has something left over from everyone — from Buddhist shrines and Hindu kovils (temples) to a commercial center known as "the fort," where grand colonial-era buildings stand beside modern hotels and office structures.

Explore the vibrant markets and bazaars in Pettah. Discover museums and art centers full of fine collections of local antiques, arts, and crafts. Or indulge in shopping and tasting Sri Lankan delicacies.

After breakfast, it's time to bid a fond farewell to Sri Lanka. We hope you'll come back soon!

This is the quintessential Sri Lankan bike ride! On this two week trip,...

Cultural Triangle and the East Coast of Sri Lanka - 13 Days

From UNESCO World Heritage Sites to tucked-away temples to bustling...

Dineia P.
United Kingdom
"We had plan to visit Sri Lanka this year, however after the events at Easter time we almost gave up this trip. We are glad we have done it. Just spend 2 week..." read more
Traveled to Sri Lanka as a couple in October, 2019
Plan your trip to Sri Lanka
Customize your trip with help from a local travel specialist
Plan Your Trip