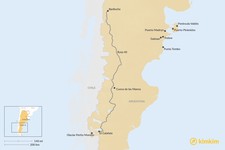 Argentinian Patagonia is one of South America’s most pristine and splendid landscapes, its mountain ranges and glaciers reminding travelers of the most recent Ice Age. The vast stretches of pampas (steppe) hint at boundless adventure, while the country’s remote and scenic Ruta 40 is Argentina’s ultimate road trip.

Argentinian Patagonia covers 402,700 sq miles of southern South America, about the combined size of Texas and California. Traveling across this vast landscape, you'll encounter prairie and high desert as far as the eye can see, plus alpine lakes, forests and jagged mountain ranges containing glaciers that spill into the sea. Patagonia is also home to extraordinary wildlife, including penguins, rhea (a large, flightless bird related to ostrich), elephant seals, whales and guanacos (related to llamas).

Covering Patagonia by bus is doable if you have plenty of time, since distances are considerable and transport along the remote Ruta 40 is infrequent. Driving from Puerto Madryn in northern Patagonia to El Calafate in southern Patagonia gives you the greatest flexibility, but it’s worth bearing in mind that one-way drop-off rental fees can be considerable.

The most wallet-friendly way to visit Patagonia’s main attractions is to divide the trip into two halves, visiting Península Valdés, Trelew, Gaiman and Punta Tombo from Puerto Madryn and using El Calafate as the springboard for traveling the Ruta 40 and stopping at the Parque Nacional Los Glaciares en route. Puerto Madryn and El Calafate are connected by regular flights to Buenos Aires.

An easy day trip from Puerto Madryn, this 3600 sq km Unesco World Heritage site is renowned for its wildlife. Once you cross the narrow isthmus, you can follow the gravel roads along the coastline. Highlights include taking a boat trip from the village of Puerto Pirámides in search of the endangered ballena franca austral (southern right whale) that comes here to breed between June and mid-December.

If you stay land-bound, spring is the best time to spot a massive colony of sea lions from the cliffs at Punta Delgada, elephant seals on the gravel beach at Punta Cantor, and a mix of the two at the remote Punta Norte. Both are hunted by killer whales in March and April.

Visiting the Paleontological Museum at Trelew

Some 40 miles (65 km) south of Puerto Madryn, this fairly nondescript 19th-century town has firm Welsh roots and takes its name from tre (town) and lew (after Lew Jones, instrumental in the building of the railway). Being in the heart of Argentina’s dinosaur country, Trelew is renowned for its one attraction: the Museo Paleontológico Egidio Feruglio, an outstanding paleontological museum that features Patagonia’s most important fossil finds.

Apart from over 1700 fossils, the museum displays local dinosaur skeletons, such as the patagosaurus, tehuelchesaurus, and an unusual short-necked sauropod, Brachytrachelopan mesai. The tour de force are the remains of the Patagotitan mayorum, the largest dinosaur ever to have walked the earth, unearthed as recently as 2012. The museum can organize guided tours to the local badlands, where you can walk among 40-million-year-old fossils.

Take High Tea in the Welsh Settlement of Gaiman

The most Welsh of Patagonian settlements, this small, appealing town sits 10 miles (17 km) west of Trelew, off the RN 25. Founded by some Welsh settlers in 1874, Gaiman is one of the few places in Argentina where you’re as likely to hear Welsh spoken as Spanish.

A third of the residents are descendants of the original colonists and Gaiman attracts visitors with its abundance of teahouses where you can sit down for a cup of tea and a spread of cakes, including the dense, rich torta negra (fruitcake). Diana, Princess of Wales, visited Gaiman in 1995 and the Ty Te Caerdydd teahouse proudly displays her teacup. After a spot of tea you can go for walks around town, enjoying the historic churches and chapels.

Some 70 miles (112 km) south of Trelew along the gravel RP 1200-hectare Punta Tombo is continental South America’s largest penguin colony. Around half a million Magellanic penguins nest here, with an additional attraction for birdwatchers in the form of black oystercatchers, giant petrels, kelp gulls and flightless steamer ducks. The interpretive visitor center is an excellent introduction to the local fauna and well-marked trails and boardwalks lead visitors around the reserve.

Stretching for 763 miles (1228 km) from El Calafate to just north of Bariloche along the spiky mountain chain of the Andes, the legendary RN 40 is Argentina’s ultimate road trip. Though largely paved now, it still feels wild, with settlements, gas stations and even fellow drivers few and far between. The boundless sky and the monotony of the steppe stretching all the way to the horizon are broken up by occasional sightings of wandering guanaco and ñandú (rhea) and glimpses of distant, snow-covered mountain peaks.

Popular with touring motorcyclists and adventurous drivers laden with spare tires and food, Ruta 40 can be driven in a couple of days, but it’s better to take your time and drive it in five. Along the way you can stop to visit some of Patagonia’s remoter attractions, such as the Cueva de las Manos, as well as some unique estancias (cattle or sheep ranch).

Off the legendary Ruta 40, this Unesco World Heritage site features Argentina’s most incredible rock art, dating from around 7370 BC.  A 45-minute guided tour leads you along the vertical cliff walls, decorated with over 800 images. Most are imprints of human hands (particularly the left hand), as well as drawings of guanacos and hunting scenes, and abstract rock art from a later period.

If you look closely, you may spot one handprint with six fingers, as well as puma paw prints and prints of a ñandú (rhea) foot. The site is on the way from the nondescript settlements of Perito Moreno to Bajo Caracoles; the scenic drive takes you through boundless steppe.

This national park – filled with glaciers spilling down from rugged mountains – is divided into two geographically separate halves. The northern half is accessed via the tiny town of El Chaltén and is centered on the Fitz Roy mountain range, the holy grail of rock climbers and trekkers.

Cerro Fitz Roy and Cerro Torre offer world-class vertical ascents, while the network of hiking trails that connects the park’s peaks, glaciers and glacial lagoons offers everything from challenging day hikes to multi-day expeditions that involve camping on glaciers.

The town of El Calafate acts as the gateway to the southern half of the park, famous for both for Argentina’s most accessible and spectacular glacier, and for the mighty Lago Argentino, Argentina’s largest lake. Limited day trips run from El Calafate to the remote southwest corner of the national park, requiring two boat crossings and trekking to reach a spectacular icy lagoon overlooked by three glaciers.

The star of the southern sector of Parque Nacional Los Glaciares, this is one of the world’s few advancing glaciers, moving forward at a rate of around 2 m per day. Every few years, the advancing ice dams part of Lago Argentino; when the water eventually breaks through the ice dam, the spectacle is remarkable.

Over 60 m high, 30 km long and 5 km wide, Perito Moreno looms over the Canal de Los Témpanos (Iceberg Channel) 50 miles (80 km) east of El Calafate. Visitors make their way along a series of catwalks overlooking the glacier, with dull booms alerting them to the calving of huge icebergs that collapse into the channel.

There are two ways of getting even closer to the glacier: taking a boat tour or taking part in an ice-trekking tour that allows you to strap on some crampons and walk right across the blue ice, arranged with tour companies in El Calafate. Tour buses from El Calafate tend to converge on the glacier in the mornings, so visit in the afternoon for a quieter time.

Immerse Youself in the Climbing Culture at El Chaltén

Hemmed in between the Rio Fitz Roy and the Fitz Roy mountain range, at the edge of Parque Nacional Los Glaciares, this picturesque village is Argentina’s trekking and rock-climbing capital. Founded in 1985, El Chaltén is today a tidy cluster of streets, awash with Gore-Tex-wearing trekkers, and a permanent population of around 1000 people. It's a terrific place to organize hikes, rock climbing trips, horseback rides, kayaking, ice climbing and fly-fishing.

It’s possible to visit the restored cabin of the original Danish pioneer Andreas Madsen, who settled nearby in 1912. The cabin is maintained by the man’s great-grandson. For such a tiny place, El Chaltén has an excellent dining scene and numerous hotels, hostels and guesthouses that fill up during high season.