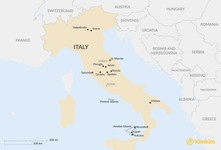 So you’ve ticked off the Colosseum in Rome, boated the canals in Venice, and have come back for more. Bravo, as the Italians would say—there is a lot more to this country than the trophy sights, and enough little-known treasures to fill a lifetime of repeat visits. Get to know the Aeolian Islands, Saturnia, the hill towns of Umbria, and more.

To really gain an insight into Italy and its one-of-a-kind culture, landscapes and cuisine, give the crowds the slip and take your lead from the locals by seeking out the hidden beaches, islands and hill towns few travelers have even heard of—you’ll be glad you did. Read on for five of our favorite places to do just that.

Off Italy’s southernmost tip, the Aeolian Islands are the stepping-stones to northern Sicily. While still off the radar for many travelers, this cluster of volcanic islands couldn’t be hotter. Come to swim, snorkel, dive, kayak and sail in glass-clear waters, or hike to smoldering craters and fumaroles. Here you'll find black-sand beaches, big sea views, peachy sunsets, and an incredibly easy-going vibe. Named after Aeolus, god of winds, the islands are rich in mythology and play a leading role in Homer’s Odyssey. UNESCO awarded them World Heritage status in 2000.

Where to begin? Well, most likely your hydrofoil from Sicily (Milazzo) or ferry from Naples will dock in the main port of Lipari, with a clifftop citadel, Castello, to explore. The archaeological museum here hides one of Italy’s most prized collections of Neolithic, Bronze Age and Greco-Roman finds.

Hop across to Vulcano for mud baths, hot springs, vineyards and volcano hikes, lava-blackened Stromboli for a guided trek to the crater of its volcano and spectacular nighttime eruptions, or greener Salina for laid-back lifestyle and pretty, cliff-backed bays like Pollara, which featured in the 1994 film Il Postino. For more glamor, join the party-loving jetset on Panarea. More remote and old-fashioned is Alicudi, where there are no roads (only mule tracks).

For more on the Aeolians, check out our nine-day itinerary.

Drive along the back roads through the low-rise hill country of the Maremma in oft-overlooked southern Tuscany and you might be surprised when the chestnut forests, marshes, and medieval hamlets suddenly give way to the phosphorescent blue waters of Saturnia. These mineral- and sulfur-rich thermal baths have been prized for their health benefits since Etruscan and Roman times. They are a bath-warm 99.5°F year round.

There’s a luxurious spa, Terme di Saturnia, where you can soak in the water to your heart’s content, or arrange detoxifying treatments like thermal mud wraps. Alternatively, follow the locals and head to the free waterfalls at Cascate di Mulino to bathe in the pools alfresco (wear your swimsuit as there’s nowhere to change, and bring your own towel). The water might smell eggy, but be assured that this is the sulfur doing its job.

Though far less hyped, Umbria can match Tuscany hill town for hill town with its alley-woven centri storici (historic centres) built in honey-colored stone, where life unfolds over a morning cappuccino, an evening aperitivo (aperitif) or a ritual passeggiata (leisurely stroll) on the cathedral-topped piazza. In between lie vineyards, olive groves and mountains that are every bit as ravishing as those further west.

A fine launchpad is regional capital Perugia, with Etruscan walls, a pristine medieval center, Perugino frescoes adorning its Gothic Palazzo dei Priori, and one of Italy’s oldest universities (14th century). From here, strike out pilgrim-style to saintly Assisi and its UNESCO-listed Basilica di San Francesco. Other adorable hill towns well worth visiting include Spoleto, with its medieval fortress and mountain backdrop, foodie Norcia for truffles and cured meats, and Orvieto, where the elaborately frescoed facade of the cathedral elicits gasps of wonder.

Like what you see? Don’t stop there. The neighboring Le Marche region is just as alluring and undiscovered.

Tuscany is an obvious choice for a wine-loving road trip, but the vini (wines) and landscapes are every bit as enticing in the less-travelled Valpolicella, with a wine-growing heritage dating back to the ancient Greeks. Just a cork pop away from Verona, the ‘valley of many cellars’ in Italy’s northeastern Veneto region has a unique microclimate between Lake Garda and the Alps. Slow touring is the way to go here, factoring in time for cellar tours and tastings of the areas protected DOC wines, perhaps on a guided day trip from Verona.

You might begin in Soave, say, where medieval fortifications gaze out over vine-striped hills and plains. Here the crisp white wine have a peachy, round, smooth palette. The region is even better known for its bold reds, full of ripe red-fruit aromas, such as Amarone, Ripasso and Classico, many of which can be tasted in the inviting setting of local, family-run cellars and wineries.

If Italians fail to tell you about these islands, dangling off the coast between Rome and Naples, it’s because this is one secret they’d prefer to keep to themselves. Less well-known internationally than super-chic Capri further south, this archipelago might well be the Italy of your wildest dreams, with high sea cliffs plunging to pink-coral, pebble and powder-soft bays, grottoes to explore by boat or kayak, crystal waters for snorkeling and diving, and sea-facing terraces for eating just-caught shellfish. To up the style ante, you could arrange a private skipper to island hop at your leisure.

The two inhabited islands are Ponza and Ventotene, with harbor towns where candy-colored houses cling to the cliff faces. Outside of peak summer season (mid-June to August), the vibe here is mellow and crowds are few.

If Matera has so far avoided the spotlight, it won’t be for long: in 2019, the Basilicata town seizes the reins as European Capital of Culture. What is remarkable is that Matera has remained little-known for this long. Spilling down a hillside and topped by an impressive duomo (cathedral), this ochre-pink town is one of the world’s oldest continuously inhabited settlements, looking proudly back on 7,000 years of history.

But what makes Matera utterly unique is the fact that these hillsides are honeycombed with sassi (cave dwellings carved out of the soft tufa limestone), ancient frescoed churches and crypts. Much of interest here lies underground, not least in the Cripta del Peccato Originale (Crypt of Original Sin), a cave network embellished with Benedictine frescoes, which can be visited on a private guided tour. For a primer on sassi history, stop by Casa Noha, a multimedia exhibition in a 16th-century home.

Until the 1950s the cave dwellings were synonymous with poverty and the living conditions dire, but today they’ve been born again as boutique hotels and minimalist-cool restaurants. To sleep in a sassi, check out our feature on Unique Lodging Options in Italy.

When should you go to Italy? Summer is very warm, especially in the...

Tuscany is a fantastic destination throughout the calendar year. But...

Many travelers with 10 days to spend in Italy choose to explore two to...

With two weeks in Italy, you can see many of the country's top sights in...
Make the Most of Your Time in Italy

Getting lost in the mazy streets of a tucked-away hill town is one of...

Explore the rocky coastlines and welcoming atmosphere of the...

If your family loves to travel and explore together, look no further...

Bring the whole family to explore history, art, and nature on this...

Get away from the hustle and bustle of everyday life with laid-back...

Explore the back roads and small villages that characterize the...