Discover one of the Aegean Sea's most significant prehistoric settlements on a private guided tour to Akrotiri and the Museums of Thera. This archaeological site features an ancient city preserved by volcanic ash for thousands of years. You'll visit two museums, both offering various prehistoric and perfectly preserved artifacts.

Your expert guide will first take you to Akrotiri, explaining its history and significance along the way. Upon arrival, you'll walk through the city's remarkably preserved ruins and learn why this site played such an essential economic role. Stroll amongst the ancient walls of the houses and hear stories about how its inhabitants lived. For example, each time the volcano erupted, they took their ships out to sea only to return and rebuild their settlement from scratch!

After exploring Akitori's ruins, you'll head over to the capital, Fira, and visit the Prehistoric Thera Museum and the Archaeological Museum of Thera. Your guide will take you through different artifacts spanning thousands of years from both Akrotiri and Ancient Thera, including entirely preserved murals.

Read about more unique activities on Santorini and interesting historical and mythological experiences in Greece. 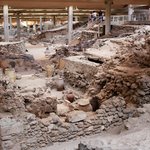 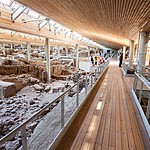 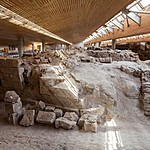 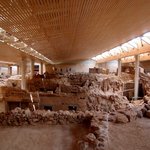 Discover Santorini's iconic and lesser-known sites and vistas on this...

Explore Santorini's special gastronomic delights and get to know the...

Discover one of Santorini's iconic sunset spots at Akrotiri Lighthouse....

The weather is just about as miserable as it gets on Santorini this...

The weather has not improved since January on the island this month, but...

March is a fickle month on Santorini, throwing some of the nastiest and...
Best of Santorini