Escape the crowds and enjoy the peaceful countryside surrounding bustling Rome. This tour combines easy, fun, and family-friendly cycling with a delicious food experience along the famous Appian Way, the oldest Ancient Roman highway. Enjoy a guided cycle into a nature reserve, stop by archeological sites, and end with a scenic picnic.

By utility, you can consider Appian Way as Europe’s first “superhighway,” a crucial road for the Roman Empire. Today, it remains one of the best attractions in the area. Originally built by Appius Claudius Caecus, the road connected Rome to Capua near Naples. Eventually, it extended more than 300 miles to Puglia on the Adriatic Coast, making it the widest and longest street in existence at the time. This was a truly noteworthy accomplishment, considering it originated in 312 BCE!

As Rome grew in size, about 30 other roads fanned out from the city center, giving meaning to the saying, “all roads lead to Rome.” However, the ancient Appian Way was the first and greatest, another surviving testament to the mighty Roman Empire. You’ll depart from the Porta San Sebastiano, just two miles south of the Colosseum. Get acquainted with your bike and head down the road. The first 10 miles of the Appian Way are now part of a picturesque regional park, Parco dell’Appia Antica, protecting the road and monuments.

Your first stop is the 9th century Domine Quo Vadis Church. Legend has it that Peter saw a vision of Christ here when fleeing Nero’s persecution in 64 CE. Across from the church are two major Christian catacombs, the Catacombs of San Sebastiano and the slightly larger Catacombs of San Callisto. As one of the best attractions in Rome, these burial sites are where many early popes were laid to rest.

Read more about unique activities in Rome and active experiences in Italy. 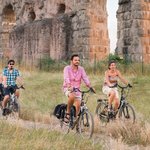 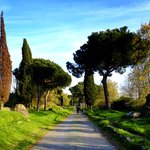 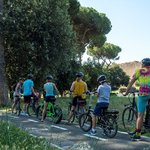 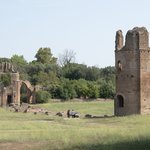 Itineraries with Bike The Appian Way in Rome 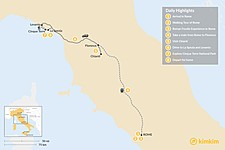 From artistic Florence to the famously beautiful National Park of Cinque Terre, this week-long highlights tour will give you a taste of some of the best that sunny, charming Italy has to offer. Explore Rome's ancient monuments, soak in the beauty of the Tuscan countryside, and visit vineyards, food shops, and incredible restaurants along the way.

Family Treasure Hunt in the Ancient Sites of Rome

Explore Ancient Rome and learn about its history with a fun,...