A sightseeing bike tour offers a unique way to take in the streets of Paris. You get to see more than a bus tour but cover more ground than on a walking tour. After meeting your guide and getting acquainted with your bike and gear, set off through the trendy and stylish streets of Le Marais, the 4th arrondissement of Paris.

As you bike, enjoy a few of the district's main sites, including the futuristic surroundings of the Beaubourg area, home to none other than the avant-garde The Centre Pompidou. Continue through Marais' buzzy streets to one of the most beautiful spots in Paris: Place des Vosges, the oldest planned square in the city, built by Henry IV in the early 17th century.

Next, make a stop at a delicious café in one of the oldest covered markets in Paris. Then, keep pedaling through the city, listening to your guide detail the scandals of the Buren Columns and the Louvre Pyramid before taking you to where the Celts first settled, the legendary heart of Paris: l'Ile de la Cité. Here you'll find the 13th-century Sainte-Chapelle and Notre Dame on your way to Ile St.Louis. This island is far less visited, but your guide will show you all the hidden secrets. 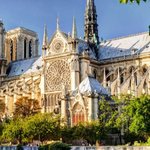 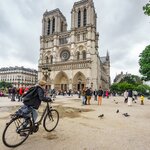 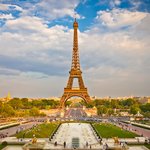 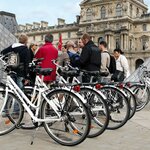 Be a Parisian for the day and explore the hip neighborhood of Le Marais....

As one of the true must-see neighborhoods of Paris, Montmartre offers a...

Celebrate your stay in France with an elegant lunch featuring a...

France is celebrated worldwide for its cuisine, but some “exotic” French...

Relive the darkest period of the 20th century and discover what life was...

Explore the City of Lights on this exciting gastronomy and culture tour....

See Paris from the top of the Eiffel Tower, explore the fishing villages...

If you've got six days and want to explore Paris and the Loire Valley,...

Enjoy a quick getaway to Paris and the Normandy coast without...
Best of Paris

Kimkim has selected the best France travel agents so you'll have a...
Plan your trip to France
Customize your trip with help from a local travel specialist
Plan Your Trip