Split is the second-largest city in Croatia and home to the dazzling Diocletian’s palace, a 4th-century haven for the Roman emperor Diocletian. Although the palace has changed its appearance over the centuries, with its surroundings eventually becoming a medieval city and, today, a modern metropolis, it's still one of the best-preserved sites in Europe. Many visitors imagine a typical palace standing alone, but as you explore inside the old walls, you'll quickly learn that the entire Old Town of Split fits into the palace itself!

Although erected in the 4th century, it wasn't until 1979 that the palace received UNESCO status, joining 11 other UNESCO Heritage Sites in Croatia. The picturesque center is perfect for sightseeing and long walks among its marbled streets and historical monuments. Enjoy stopping to admire the beautiful architecture from Roman to modern times.

Some not-to-be-missed sites within the palace include the Old Town Hall on People's Square, Golden Gate, Iron Gate, Jupiter's Temple, and Saint Domnius Belltower. We also suggest visiting the old cellars and substructures, as they're well-preserved and still boast their original size.

You can easily enjoy this tour on your own or with the help of a guide. If you like walking, continue down the Riva and up the local Marjan Hill Park for beautiful vistas over Diocletian's Palace, the city of Split, and the Adriatic sea. You'll also find a few historical sites in the park, plus quiet swimming coves and beaches. 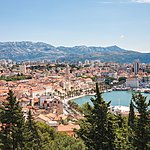 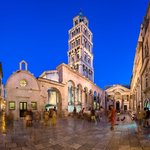 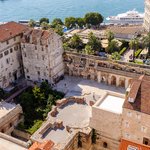 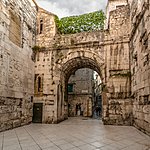 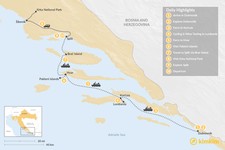 A combination of diverse cultural exploration and active adventure, this 10-day itinerary highlights the southern Dalmatian coast. You'll explore historic Dubrovnik, ancient Split, and idyllic Hvar, as well as venture to nearby islands, Krka National Park, and Šibenik. You'll bike Korčula Island, kayak off of Dubrovnik and Hvar, sail amid the Pakleni Islands, and discover the island of Brač.

Discover the Dalmatian Coast on this 6-day tour of Croatia, starting in the city of Split with its 4th-century Diocletian's Palace and sprawling Marjan Park. Head inland to explore one of the country's waterfall-infused parks (Krka or Plitvice) before heading south to Dubrovnik to walk its old town and historic walls. Along the way, stop on the Pelješac Peninsula for old fortifications, world-famous oysters, and delicious red wine, plus an optional kayaking excursion.

Uncover Croatia's colorful history and culture on this 6-day itinerary focused on Northern Dalmatia. From the lively capital of Zagreb you'll find your way to the country's most popular park, Plitvice Lakes National Park, and continue to historic Zadar along the Adriatic coast. Cap off your trip with three nights in fascinating Split.

This short and decadently sweet itinerary is perfect for travelers who are short on time and love indulging in luxurious travel experiences. You'll tour the Dalmatian coast beginning with a food tour of local delicacies in Split, then it's off to Hvar to explore dazzling beaches and rugged island scenery before joining a private boat tour to nearby islands. Your holiday ends in Dubrovnik, where you'll enjoy a walking tour of the historic city as well as visit the rustic countryside of the Konavle region.

Explore the best of Croatia and Slovenia on this 15-day itinerary, from the walled city of Dubrovnik to Ljubljana's leafy and pedestrian-friendly streets. Spend three nights aboard a private catamaran as you tour the Adriatic coast and its islands, including Šipan, Koločep, Mljet, and the ever-popular Korčula and Hvar. You'll ride an electric bike around stunning Krka National Park, listen to the Sea Organ play its unending melody in Zadar, and go underground and meet Brilliant, an imposing stalagmite in Postojna Cave.

Combine an active bike ride with a history lesson as you pedal through...

There’s no better way to experience Croatian culture than by learning to...

Explore Split through your tastebuds with a walking food tour through...

The 6 Best Boutique Hotels in Split

Split is the kind of city you’ll want to take in at your leisure, and...

Croatia is a prime spot for history buffs, with numerous cultural...

Kimkim has selected the best Croatia travel agents so you'll have a...
Plan your trip to Croatia
Customize your trip with help from a local travel specialist
Plan Your Trip