Bordering Iceland's vast Vatnajökull National Park is the famed Jökulsárlón Glacier Lagoon, known for its incredible scenery, floating icebergs, and wildlife. The lagoon connects to two of Iceland's other glaciers, Breiðamerkurjökull and Vatnajökull, Europe's largest ice cap. Eventually, the lagoon's waters flow across the black-sand beach known as Diamond Beach and into the Atlantic Ocean. Nestled between the towns of Hof and Höfn, you can find the lagoon along Iceland's popular Ring Road.

Enjoy an exciting and picturesque boat trip on the lagoon, sailing among huge, electric-blue icebergs and reveling in the striking scenery of Jökulsárlón. You may even spot some local wildlife, including Arctic Terns, Skuas, and the hundreds of seals that feed on the lagoon's fish population. You'll also learn a bit about the lagoon's history, as it formed in the 20th century due to rising temperatures. Scientists believe Jökulsárlón will eventually expand into a larger, deeper fjord. 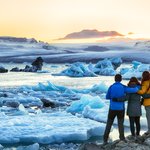 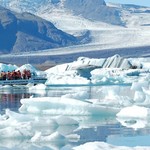 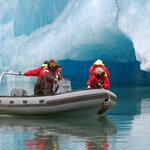 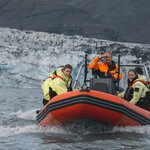 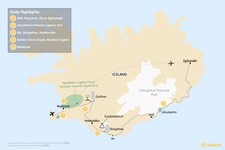 5 Days of Iceland’s Highlights: East to West from Egilsstadir via Jokulsarlon to Reykjavik

Have less than a week in Iceland and a lot on your bucket list? This itinerary will help you see lots of amazing sights in 5 days. You’ll start off with a spectacular local flight over the heart of Iceland followed by three days of scenic driving along the coast. 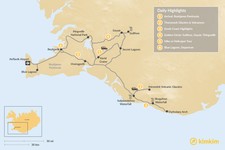 Pack your short trip to Iceland with adventures away from the crowds while still experiencing the most popular sights. This itinerary is perfect for travelers who have lots of energy and want to make the most of a short visit to Iceland. 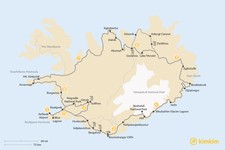 If you want to see Iceland's top natural highlights, a self-drive tour is by far the most popular option. Travel at your own pace with plenty of changes to head off the main road in search of your own adventures. This tour also includes the Snaefellsnes peninsula which many call "mini-Iceland" as almost every natural phenomenon in Iceland can be found there, albeit on a smaller scale than elsewhere.

Walking through the electric-blue ice cave of the Vatnajökull glacier is...

You'll find the Jökulsárlón Glacier Lagoon between the towns of Hof and...

Along the southern portion of Iceland's famed Ring Road is the humble...

Set just south of Hof—a small town along Iceland's South Coast via the...

Along the southern portion of Iceland's famed Ring Road is the humble...

Iceland is the land of fire and ice, so exploring the country's glaciers...

Snorkel in the Silfra Fissure

Immerse yourself in the clearest water in the world and float between...

Horseback Riding in the Golden Circle

Just outside Reykjavik is one of Iceland's most picturesque geothermal...

Best of the South Coast

Iceland's most visited region attracts more than a million visitors a...

The South Shore between Vik and Selfoss is full of many popular sights...

Egilsstaðir to Vik: Top Sights and Stops from East to West

The Drive from Egilsstaðir (east) to Vik (south) offers some incredible...

Short on time? This jam-packed 4-day adventure tour was designed with...

This winter tour through Iceland's south coast explores some of the...
Best of the South Coast

Kimkim has selected the best Iceland travel agents so you'll have a...
Create your custom-made trip to Iceland
Get Started