Explore the myths and fables of the natural world inside the Ioulia & Alexandros N. Diomidis Botanical Garden. This kid-friendly activity features a professional biologist who shares the stories of gods and goddesses from ancient Greek mythology. You'll learn the answers to questions within these stories, such as what connects the pine trees with Pitys and the relationship between the first feminist Rodanthe of Corinth and the roses.

As the largest Botanical Garden in the southeastern Mediterranean, you'll be surrounded by over 4,000 species and subspecies of plants. As you stroll through the greenery, enjoy learning about the relationship between humans, nature, and plants. According to Ancient Greek legends, gods, goddesses, and nymphs always play with our imagination and travel around us in nature!

The ancient Greeks lived inside forests, near the sea, and atop mountains for centuries. Many feared and worshipped nature, including the sea, sky, rivers, lakes, trees, and fountains, all designated as gods. Some, however, were mere mortals who changed shape to become a rock, a tree, or an animal. Listen to various stories, including Aphrodite’s myrtle, Apollo’s laurel, and Zeus’ oak tree.

Αt the end of the tour, you can stay and enjoy the gardens. The grounds are the perfect place for a family picnic and feature a well-protected playground.

Read more about unique and interesting family experiences in Greece and activities in Athens. 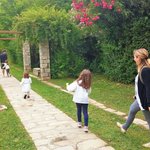 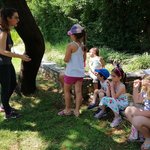 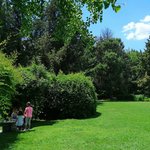 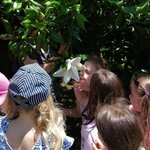 Itineraries with Mythology & Botanical Gardens in Athens for Kids

Take ten days to explore some of the less-visited corners of mainland Greece with this itinerary. This faster-paced trip is ideal for families with school-age children, especially those who have been to Greece before and want to see a different side of the country. You'll still start in Athens, but after a mythology-filled tour through the Botanical Gardens, you'll head out to the historic sites of Meteora and Delphi. See the seaside city of Nafpaktos and natural wonders around the Corinthian Gulf before you head home.

Take two weeks to travel to some of Greece's lesser-visited landmarks and villages with this family-focused itinerary. Guided tours specifically designed for school-age children will help keep everyone engaged with stories from history and legend as you visit ancient monuments, gardens, and natural attractions. Start with the main sights in Athens, then hit the road up to the temples of Delphi, sky-high monasteries of Meteora, the northern bustle of Thessaloniki, and stone villages of Zagori.

Take a week to traverse the northern Greek mainland on this efficient itinerary. With seven days, family with school-age children who want to see some lesser-known spots will start their drive from Athens. Head to Corinth and its famed ancient canal, stop in the seaside town of Nafpaktos, and wrap up your trip with the hillside temples of Delphi.