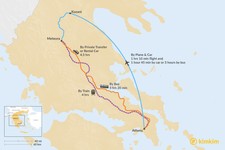 The journey from Athens to the city of Kalabaka, located in the stunning mountainous area of Meteora, is 221 miles (355 km), with car, bus, train, and combination plane-and-land options, depending on your travel preferences.

The easiest way to get to Kalabaka from Athens is by train. Kalabaka has its own train station, which is connected directly to the Athens Larissa Station. Throughout the high season, there are about four or five departures from Athens to Kalabaka per day. This depletes to one or two in the winter. Note that train tickets during the high season sell out very quickly, so make sure to book your tickets well in advance.

Unfortunately, there are no direct buses from Athens to Kalabaka, although you can get very close—to the city of Trikala, which offers a separate 20-minute bus the rest of the way to Kalabaka.

Car rental in Greece can be very affordable, leading many to make the trek from Athens to Kalabaka on their own. Many rental companies allow you to pick up in Athens and drop off in Kalabaka or another location. Note that the route between Athens and Kalabaka features many toll roads, which definitely add to the travel expenses.

It is possible to split up your trip a bit with both by-air and by-land options. However, a flight from Athens will take you north to Kozani “Filippos” Airport, which is 76 miles (123 km) away from Kalabaka. After that, it’s possible to rent a car, take a bus, or take a train back southwest to Kalabaka. This is a more expensive, and possibly more timely option, although it does allow for less travel time on land, if that’s what you’re after.

For the ultimate guide of Meteora’s monasteries and geological wonders, read our article here. If you wish to extend your Grecian adventure, we’ve mapped how to get to Zagori after you arrive at Kalabaka here.

The stunning route from Athens to Kalabaka is direct and leaves about four or five times during the high season. The Athens train station is located on the red line, very close to the center of the city. All trains have on-board bathrooms and cafés with tasty Greek products, toasts, sandwiches, desserts, and croissants, along with soft drinks and other beverages. There’s also usually a Greek food menu on-offer, which changes daily. Seats are assign, with both first class and second class options.

The trip from Athens to Kalabaka features four toll roads, adding up to the majority of your drive. There are several car rental companies on offer at the Athens Airport, the Athens Piraeus Port, and scattered throughout the city. In Greece, prices for rental vehicles are normally negotiable, and you’ll pay more for an automatic.

The first bus takes you from Athens to Trikala, and lasts around five hours. After that, you have to board a separate bus to get to Kalabaka, which takes about 20 minutes. Note that you might have to wait a bit of time to catch the next bus to Kalabaka, but the Trikala station has free wifi along with a food court.

If you happen to wish to return to Athens after Kalabaka, know that purchasing a roundtrip ticket is far cheaper than purchasing a one-way. Tickets can be purchased in cash from the Liossion Bus Station only. Make sure to hold onto your ticket throughout the duration of the trip, as there will be routine checks to ensure you still have yours. The schedule can be found with the KTEL Bus Website.

If you wish to split up the trip to decrease your time on-land, one flight departs from Athens International Airport and lands directly at the Kozani Airport in 1 hour and 10 minutes. After that, it’s up to you how you want to make the rest of the trek. It is possible to rent a car once you arrive at Kozani, which allows you to take your time through the mountainous scenery, stopping at various towns along the way. Buses also leave from Kozani bus station and require 3 hours and 15 minutes of travel time to arrive at Kalabaka.

The distance between Chania and Santorini is 100 miles (162 km)....
Getting Around Greece

Daniel F.
Georgia, United States
"Just not used to not meeting Dimitris for the whole trip - next time need to give me WARNING about the Hotel in Santorini being Down on the cliff - i was pan..." read more
Traveled to Greece solo in October, 2019
Plan your trip to Greece
Customize your trip with help from a local travel specialist
Plan Your Trip