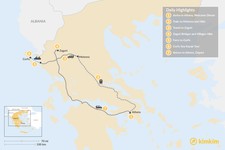 This weeklong adventure trip takes you through some of the highlights of central Greece. Go up to Meteora's monasteries in the sky, then down into the gorges of the Pindos mountain range to explore the stone villages of Zagori. End your trip by kayaking around Corfu's petite Pontikonisi island.

Day 2: Train to Meteora and Hike

Travel by train across the Central Greece countryside for a day among the famous monasteries of Meteora. These religious buildings sit atop rock formations that are more than 60 million years old. You'll tread the same paths that monks used for hundreds of years to reach these holy places, perched close to 1,000 feet in the air above the canyons of the Pindos range. Before the paths were constructed, the monastery residents used nets and rope ladders to hoist goods (and sometimes their fellow clergy) to the clifftops.

The roughly five-hour train ride will take you from Athens through the rural landscape to Kalabaka, the town gateway to Meteora. Once you've arrived, you'll explore the Meteora rock formations and monasteries on foot with today's hike, taking you through both nature and religious history.

Cover the paths used by some of the monasteries' first monks, enjoying views of the area's unique geological features in the Meteora valley while your guide tells you about the region and its past. You'll also stop at either the Great Metereon or Varlaam monastery.

After breakfast, head to the fairytale Zagori Villages. This cluster of more than 40 hillside villages hides its well-preserved stone structures among the snowcapped mountain peaks, rivers, and gorges of Pindos, built amphitheatrically amid unspoiled landscapes.

Whether you choose to linger under the trees, explore old monasteries, or visit the stone mansions of well-known residents, you're sure to find something to enchant you. Though Zagori is most popular as a winter destination, the mountain towns are equally as charming amid autumn foliage or in spring and summer when the peonies and hydrangeas bloom.

Many of the villages are on the List of Traditional Settlements of Greece, a testament to their unchanged nature over the years. Your local specialist will provide you with a custom guidebook to help you decide where to wander.

Discover the rest of the Zagorichoria, villages of Zagori, in the Pindos mountains, the ideal spot for fairytale exploration.

Due to the unique flora and fauna present in the region, it's been designated a national park with strict preservation rules. You'll take an easy guided half-day hike (great for families), taking in views of the surrounding scenery and learning about the history and culture of the region. It's a beautiful walk among the stone houses, small farms, and river bridges, which were built with a special technique believed to be unique to the region.

Stop at the sixteenth-century Monastery of Pagia Spiliotissa for some bonus exploring, built atop a rock overlooking the Voidomatis river. The village of Vitsa makes an ideal stop for lunch, especially if you can find the area's mushroom-hunting expert. Spend the rest of your day resting and enjoying the slow pace of life in this region.

Today you'll head down to the sea, with a boat transfer to the island of Corfu in the Ionian Sea. Watch for the many species of marine mammals that call the surrounding waters home on your way, and see why Odysseus was able to recuperate from his mythological journeys here.

You'll enter the city past its two guardians of the Old Fort and New Fort. The former was built in the thirteenth century and is surrounded by a seawater moat. It hides a slew of iconography, including the Porta Sopranza, winged lions of Saint Mark, and the Doric-inspired Church of St. George behind its walls. The New Fort on the northwestern border, meanwhile, boasts cubist military architecture.

You'll receive a personal guidebook from your local specialist to enhance your explorations on your arrival. See the sandstone beaches, Pompeiian-inspired Achillion Palace, Pontikonisi Island, and Mon Repos aristocratic villa and gardens with local tips close at hand.

Spend a leisurely morning exploring the town before you set off on today's aquatic adventure. Your guide will create a custom itinerary for your sea kayak tour along Corfu town whether you want to stop at a few area highlights or jump in the water for snorkeling.

Some sea kayaking tour sights include:

You can also visit Liston Arcade when you return to shore. Inspired by the Parisian Rue de Rivoli, it's perfect for an afternoon stroll accompanied by gelato. The meandering kantounia, small, narrow streets, display the many European influences around the island.

Dive deep into the Cretan lifestyle in the island's far west region of...