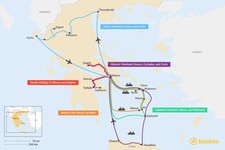 With 10 days to spend in Greece, travelers won't have too many tough choices to make. You'll have plenty of time to island hop around the Cyclades, do a deep dive into ancient history on the mainland, or combine the highlights of both. Check out these 5 itineraries optimized for every type of traveler, from active adventurers and families to those who simply need 10 days of blissful relaxation.

Take the coast of the Cyclades from guidebook covers straight to your own social media feed on the famous islands that have captured travelers' imaginations for centuries. You'll explore via boat and bike, from sunny beaches to an island farm.

Start with a food tour of Athens before two days on Santorini, where you'll beach hop, take a catamaran cruise, and explore the island's many walking paths. Then, ferry to Naxos, the lesser-known island where you'll spend the next three days. Bike from village to village on a guided tour, take an authentic cooking class in a local home, and enjoy plenty of free time to hike and see historic sights. End your trip with Mykonos—iconic beaches, local farms, and a farewell dinner await. Learn more

Blend education and relaxation with this itinerary for the whole family. You'll explore the streets and ancient sites of Athens via hands-on experiences before heading to coastal Nafplio for some shore time and a glimpse into Greek agriculture.

The journey starts in the capital, with an interactive city tour led by guides specializing in children's education. Then, take a day trip to Mount Hymettus for a nature walk and spend a morning learning all about the origins of the Olympic games—the kids will even get to participate in a race of their own. After visiting the famous archeological site at Delphi, ferry to Nafplio for three days of family-friendly bike tours and farm visits (complete with cute animals). Head back to Athens for a food tour before your last night in Greece. Learn more

Dive headfirst into history with this tour of some of ancient Greece's most important sites. Go from the Acropolis to the islands of Delos, Santorini, and Crete, and see fascinating archaeological ruins and visit some of Greece's most beautiful locales along the way.

A mix of free time and guided historical tours in Athens starts this itinerary off right. On day three, visit the ruins of Delphi, once home to priestesses of Apollo that were believed to predict the future. Then, hop from glittering Mykonos to glamorous Santorini before three nights on Crete, the largest of the Greek isles. Take a field trip to one of the Aegean's most significant prehistoric settlements, the excavated city at Akrotiri at the southern tip of Santorini, followed by guided tours of the Palace of Knossos and once-powerful Aptera. Round out your history lesson with the Cyclopean Walls of Mycenae and the steps of Palamidi Castle in Napflio. Learn more

Itinerary #4: Relax in the Secret Cyclades

Syros, Tinos, Naxos, and Ios haven't graced as many guidebook covers as their better-known Cycladic cousins, but that just means there's more for you to discover—without battling hordes of selfie sticks.

Take a day to see the sights in Athens at your leisure and hop aboard a ferry to Syros, home to the cobblestoned capital of the Cyclades and incredible examples of traditional Greek architecture and domed churches. Then head to Tinos, a true hidden gem where you'll spend two days exploring Venetian ruins, hiking at Exomvourgo mountain, and taking a culinary workshop. Keep an eye out for the many painted dovecotes around the island as well, small white pigeon homes dotting the countryside of which there are nearly 1,000.

Naxos is next—taste some of the trademarks of the island on a multi-town food tour. You'll meet with local producers to sample and even create some of the island's better-known dishes, such as loukoumades fried donuts and keftedes meatballs. Then, ferry to tiny Ios for a chilled-out beach day and the quiet, undeveloped hills of Sikinos, before ending your trip with a sunset toast at Cape Sounion. Learn more

Northern Greece stretches across more cultures and terrains than any other region in the country. This itinerary starts off in the country's second-largest city before a series of outdoor adventures on the mainland and the beautiful island of Corfu.

Arrive in Athens and head north to Thessaloniki for a self-guided walking tour (and plenty of amazing food and wine). From there, explore the fairytale Zagori Villages, clusters of stone edifaces arranged amphitheatrically among snowcapped mountain peaks. Spend the next two days hiking the dramatic Vikos Gorge and rafting with a guide down a mellow section of the Voidomatis River. Spend the second half of your trip on the island of Corfu: sea kayak along the shore, hike Mount Pantokrator, take a Jeep safari through the countryside, and enjoy plenty of time to explore the towns and rugged coast at your own pace. Learn more

For more Greece trip ideas, see all of our 10-day tours and itineraries, ranging from active, to classic, island hopping, or family-friendly trips.

Or, describe your ideal trip and we will connect you with a local specialist to design something special.

Get ready for gorgeous views and a healthy dose of history on this...

Dive headfirst into history with this tour of some of ancient Greece's...

Some of the most-discussed spots in Greece are yours to explore on this...
Greece 10-Day Tours & Itineraries