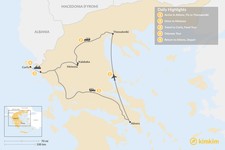 Northern Greece has been the home of mighty civilizations, including the Macedonians, Thracians, Romans, Byzantines, Slavs and Ottoman Turks. Get a five-day glimpse into their world with this itinerary.  From the bustling streets of Thessaloniki, you'll go on to see the monasteries of Meteora as they touch the sky, then follow the footsteps of Oydsseus to the Ionian Sea.

Welcome to Greece! Your journey begins in history-rich Thessaloniki in the north. After landing in Athens, you'll transfer to your short flight to this dynamic city.

The day is yours to explore with a self-guided walking tour, so you can pick and choose based on your interests and time of arrival. You'll start with history, scoping out the UNESCO World Heritage listed Byzantine churches and the Roman agora, which hosted traders from around the Mediterranean for thousands of years.

Continue to the modern food and flower markets amid the riots of color and flavor on view. Don't miss the opportunity to sample the bougatsa, a typical semolina-based dessert. Keep going on to the crypt of Saint Dimitrios, a subterranean space recently discovered below the church. You'll learn about the range of cultures that have shaped Thessaloniki as you go, including Ottomans, Christians, and Jews.

End your trip at the top of the White Tower. This fifteenth-century structure is one of the city's most famous landmarks and its unofficial symbol, and is home to both a history museum and views across the water.

Drive across the Central Greece countryside to visit the famous monasteries of Meteora. These clifftop monasteries, including Megalo Meteoron and Agios Stefanos, sit perched atop high rock formations but are still inhabited and used by monks and nuns today. The area has been named a UNESCO World Heritage site and is one of the largest pilgrimage sites in Greece.

Meet your guide for three hours among the monasteries. You'll see all six of the monasteries, with visits inside one or two of them for a glimpse of what the ninth-century monastic life may have been like.

You'll tread the same paths that monks used for hundreds of years to reach these holy places, perched close to 1,000 feet in the air above the canyons of the Pindos range. Before the paths were constructed, the monastery residents used nets and rope ladders to hoist goods (and sometimes their fellow clergy) to the clifftops.

In the morning, you'll head to the coast of the Ionian Sea and hop aboard a boat transfer to the island of Corfu. Watch for the many species of marine mammals that call the surrounding waters home on your way, and see why Odysseus was able to recuperate from his mythological journeys here.

You'll enter the city past its two guardians of the Old Fort and New Fort. The former was built in the thirteenth century and is surrounded by a seawater moat. It hides a slew of iconography, including the Porta Sopranza, winged lions of Saint Mark, and the Doric-inspired Church of St. George behind its walls. The New Fort on the northwestern border, meanwhile, boasts cubist military architecture.

Eat your way around the Old Town after your arrival with a guided food tour.  You'll spend three hours sampling everything Corfu has to offer, noticing its traditional roots and Italian influence along the way.  Meet the players of the local food scene as you learn about the history of Corfiot food and ingredients and visit the open-air markets. Your samples will include loukomades (fried dough with honey), spinach and cheese pies, kumquats, cold cuts, and seafood mezze, along with ingredients like traditional butter and cream, olive oil, and plenty of ouzo to wash it down.

Don't leave the Old Town at the end of your tour, but instead spend some time walking off all that food around this UNESCO World Heritage site. Look up to see the crisscrossing balconies indicative of Corfu's Neapolitan influence or have a seat in Spianada Square to watch the city life go by.

Travel back to Homer's Odyssey with this adventure.  According to the story, Corfu was the island of the Phaeacians, where Odysseus was shipwrecked during a storm while trying to escape from the nymph Calypso. Your guide will take you around the island to points relevant to this Classical epic over the course of this 6-hour tour.

Some top stops include the beautiful Paleokastritsa bay, possibly the spot where Odysseus washed up on the shore and was discovered by princess Nausicaa, and Ermones beach, another equally scenic contender for Nausicaa's place of discovery with trees down to the edge of the sea. You'll also visit the Kanoni area, where you can take in views of the islet of Pontikonisi while listening to stories from Greek mythology.

Northern Greece stretches across more cultures and terrains than any...
Best of Corfu

The Best Boutique Hotels in Thessaloniki

Seven to 11 days is a great length for a Greece trip with stops in...
Best of Thessaloniki

In just five days, you can see a lot of Greek antiquity — especially if...
Best of Meteora

Katie S.
Ohio, United States
"Dimitris was an excellent help on my first trip to Greece. He booked us in wonderful, cute, small hotels, planned our transfers to perfection and was extrem..." read more
Traveled to Greece as a group in July, 2022
J
Joanna C.
California, United States
"Eleni did a wonderful job providing great lodging, locations, and experiences during our trip to Greece. We had a family of four with two teenagers and got t..." read more
Traveled to Greece as a family in July, 2022
Plan your trip to Greece
Customize your trip with help from a local travel specialist
Plan Your Trip