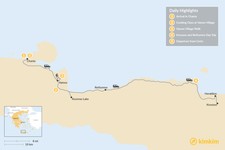 The 5-day version of this compact itinerary focuses on the far west region of Chania. Arrive in Crete, the largest of the Greek isles, before heading to the traditional village of Vamos for a cooking class and two nights in a charming guesthouse. Take a guided village-to-village trek, visit the ancient Minoan palace of Knossos on a day trip, and stroll the waterfront in the city of Chania without feeling rushed.

Welcome to Greece! Your journey will take you to Crete, the largest and most populous of the 230 inhabited Greek islands. Upon arrival to Chania, a city (and region) on the northwest coast, you'll be transferred to your hotel as you get ready to explore this stunning island, equipped with tips from your local specialist.

Chania itself will be the main base of your operations during your trip. It's the second largest city in Crete and one of the most scenic spots on an island with stiff competition for that title. Life in this former Venetian city revolves around its charming 14th-century harbor, narrow streets with winding alleys, and colorful architecture influenced by past Ottoman and Egyptian eras.

Depending on what time you arrive, wander around town or head for one of the western region's spectacular beaches such as Falassarna and Elafonissi. There are also plenty of deserted coves and quiet bays to enjoy total privacy.

For dinner, wander around Chania's harbor and check out a slew of waterfront restaurants with a sunset view.

Today, you'll head to traditional Vamos village, where the lush greenery and natural scenery will set the stage for your discovery of local food production. A resident cook will teach you all about Cretan culinary tradition and some of the island's secret recipes. You'll then put her advice into action, creating a full Cretan feast for you to enjoy at the end of your class.

After class is over and you've had your fill, relax into the rhythm of traditional village life. You can also take an afternoon drive over to beautiful Kournas Lake. This shallow freshwater lake is the ideal place to experience the natural life on the island, fed by two natural springs. Cap off your day with a stay in a traditional guesthouse in the village.

After breakfast, you'll keep up the leisurely pace with a stroll around the village of Vamos. Spend roughly four hours exploring and sampling Cretan hospitality—with emphasis on the sampling, as you'll enjoy tastes of local food and drink along the way. This is also an opportunity to trek between the charming stone architecture of nearby villages while your guide teaches you about their history and everyday life through the ages. Cap it off with a glass of tsikoudia, a grape-based brandy.

Head back to your village lodging to relax for the afternoon before a traditional dinner. Don't miss the dakos salad, a traditional dish consisting of fresh tomatoes and creamy sheep or goat cheese served atop crunchy barley rusks and topped with olive oil and spices.

After breakfast at your hotel, you'll venture out to the city of Heraklion and archaeological site at Knossos, roughly two hours' drive away. Start by visiting Heraklion's Archaeological Museum, home to one of the largest collections of Minoan artifacts in the world. This is an excellent crash course for the next stop, located just outside of town: the 3,500-year-old Minoan palace of Knossos, a sprawling maze of royal chambers, grand staircases, storerooms, and workshops. This evocative Bronze Age site is believed to be Europe's oldest city, and you'll learn all about its history and mythology with your guide.

You'll then return to the western part of Crete, visiting the aristocratic seaside town of Rethymno—the island’s intellectual and cultural capital. Wander around the town's lively Venetian harbor, check out the town's 19th-century lighthouse, or take a sunset stroll along the sandy Rethymno beach, before heading back to Chania for the night.

It's time to say farewell to Crete with one final breakfast in Chania. Take a sunrise stroll along the harbor or perhaps indulge in one more scoop of graviera cheese before you're transferred to the airport for your departure.

Dive deep into the Cretan lifestyle—specifically the far west region of...

Though it still belongs to the Greek archipelago, Crete has a distinct...

Experience the culture, scenery, and romance of Crete—Greece's largest...
Best of Chania

Dive deep into the Cretan lifestyle in the island's far west region of...
Best of Crete

City to Cyclades for Families: Athens and Naxos - 7 Days

Enjoy a mini Greek experience with even the mini members of your family...

Athens and the Cyclades for Families: Athens, Paros & San...

Get out into the Greek islands with your school-age children on this...

Athens and the Cyclades for Families: Athens, Tinos, Naxo...

The whitewashed architecture of the Cyclades is one of the most classic...

Crete is the largest of the Greek islands, a place rich in history,...
Getting Around Greece

Daniel F.
Georgia, United States
"Just not used to not meeting Dimitris for the whole trip - next time need to give me WARNING about the Hotel in Santorini being Down on the cliff - i was pan..." read more
Traveled to Greece solo in October, 2019
J
Jenean L.
Canada
"Every aspect of this trip was amazing, being picked up after every plane, ferry etc was awesome! Every person we interacted with was great and super accommo..." read more
Traveled to Greece as a group in September, 2019
Create your custom-made trip to Greece
Get Started